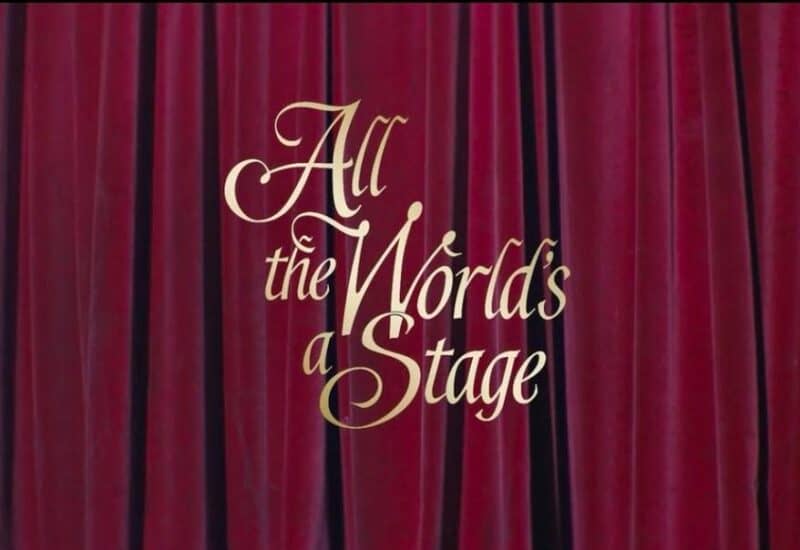 As It works its way through each day these days, a lot passes through the DP mind, as you can imagine.  Taking stock of the last 70+ years; looking around and evaluating how things are now; considering a limited future; relishing sights and sounds that in the past I took for granted.  That sort of thing.

The Bard’s Seven Ages of Man sprang to mind.  How does DP measure up?  Here it is in full, all 28 lines. Click if you wish.

Let me dissect it:

All the world’s a stage,
And all the men and women merely players;
They have their exits and their entrances,
And one man in his time plays many parts,
His acts being seven ages.

At first, the infant,
Mewling and puking in the nurse’s arms.

We didn’t have a nurse, but presumably I did mewl in the midwife’s arms, and later definitely puked.  And not only as a child …..

Then the whining schoolboy, with his satchel
And shining morning face, creeping like snail
Unwillingly to school.

Not so sure I went unwillingly. I quite enjoyed my schooldays.

And then the lover,
Sighing like furnace, with a woeful ballad
Made to his mistress’ eyebrow.

Ah yes, at different times Infatuated with three lovely women.  No ballads though, unless we include the joy of singing with them.

Then a soldier,
Full of strange oaths and bearded like the pard,
Jealous in honour, sudden and quick in quarrel,
Seeking the bubble reputation
Even in the cannon’s mouth.

Difficult to match this.  In one sense I was for a time a quasi-Wing Commander when the Commandant of the Saudi institute gave us Brits badges in the hope that the cadets would understand our authority.  Mine was three broad stripes.  ‘The bubble reputation’. Splendid phrase!  So many fight desperately for kudos and recognition, boosting self-pride.  But all is vanity.  It’s a bubble.  Kipling’s If sums it up.  Click that too, if you like.

And then the justice,
In fair round belly with good capon lined,
With eyes severe and beard of formal cut,
Full of wise saws and modern instances;
And so he plays his part.

This is me as counsellor, executive coach, management consultant, playing the wisdom and experience cards for all they were worth.  And a couple of times with beard, for gravity.

The sixth age shifts
Into the lean and slippered pantaloon,
With spectacles on nose and pouch on side;
His youthful hose, well saved, a world too wide
For his shrunk shank, and his big manly voice,
Turning again toward childish treble, pipes
And whistles in his sound.

I like the phrase ‘lean and slippered pantaloon’.  These days DP is certainly lean and slippered.  Not sure exactly what a pantaloon is but am happy to be called it.  I’m spectacled (can’t use contact lenses any more).  Trousers loose and flapping.  ‘Big manly voice’?   Well we know what’s happened to that!

Here I am, with the last scene not too far off.  Yes, I buy into that.  Happily.

That was a nice canter through my 70+ years.  Enjoyable.  My Stage has allowed me to play so many parts in the drama, and it still does.  Now we’re entering the final Act, but how many Scenes it will have is anyone’s guess.

That’s all today from this spectacled, trouser-flapping, lean and slippered pantaloon.