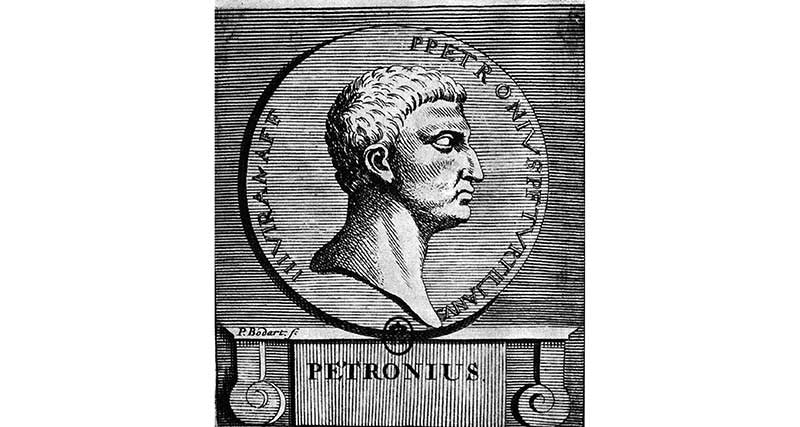 At last, a direct news link!   Boris Johnson, almost certainly under the influence of Dominic Cummings, is getting rid of Britain’s top civil servant; and there are strong reports of widespread changes planned, changes to the structure of the civil service as a whole, and a move towards greater decentralisation, with more departments moving out of the capital.

In my mid-teens, studying Latin and Greek at school, probably the most stimulating book to read was the Satyricon by Petronius.  Written in the time of Nero it depicted, through fictional stories, the customs and ways of life of Rome’s elite society, stories of excess and debauchery.  Gaius Petronius Arbiter was close to Nero, part of his court.  The ‘Arbiter’ cognomen suggested that he might have been the Emperor’s ‘arranger’, advising and perhaps even managing the scenarios of gross indulgence enjoyed by the Emperor and his entourage.  The characters were fictional, and I think Nero was never mentioned, but it was pretty obvious that the accounts of decadence and hedonism were drawn from the writer’s direct involvement in the imperial depravity.

So what’s the link?  Restructuring the civil service, and the depravity of the Satyricon?  Well, our Prime Minister is a classicist – at one time he was President of Britain’s Classical Association – so that’s one thing; and it’s tempting to try to link the two – wish I could do that! – but it isn’t about the depravity.

Years later, when I was working as a senior exec in large organisations, some sentences attributed to the Satyricon were occasionally quoted:  “We trained hard … but it seemed that every time we were beginning to form up into teams we would be reorganized. I was to learn later in life that we tend to meet any new situation by reorganizing; and a wonderful method it can be for creating the illusion of progress while producing confusion, inefficiency, and demoralization.”

How true that often seemed.  I called it the ‘concertina’ approach.  Large and complex organisations – companies, government departments, charities – would generally have a central (Head Office, HQ) core of management, direction and policy making, with numerous business units or their equivalent spread nationwide or across the world.  As a consultant I worked with a number, but was also full-time senior exec at Head Office of British Aerospace and Tarmac plc. This is the sort of thing that happens:

There’s a natural tension between business units and Head Office/HQ.  Policy is made at the centre.  The centre offers common professional services across all units.  The centre issues ad hoc instructions.  The centre tries to instil a common culture.  The business units often have little in common with each other: in BAe, Royal Ordnance and Commercial Aircraft might not be soulmates.  In Tarmac the highly specialised artisan unit that did refurb work on the royal palaces might not engage culturally with minerals and aggregates units.  Often the business units are run by strong leaders, specialists in their fields and sectors, proud of their services and products, and resentful of interference.  In my experience rarely is there hostility between the units, but there can be serious friction with Head Office/HQ.  Sooner or later it gets too much.

I reckoned, as a very broad judgment, that it takes about seven years for a commercial organisation to address this.  Head Office enjoys centralised control, fondly imagining that when it sends a directive to the units those directives will be implemented.  Ain’t necessarily so.  A Chief Executive once told me that in his company, where there were eight levels of management, a directive would reach down two layers from the top and then stop.  Frustrating.

My very general estimate of a seven-year concertina cycle was simply reflecting the reaction to these tensions: ‘restructuring’, ‘reorganising’.  The great new idea would be to ‘decentralise’, to ‘empower the business units and their leaders’, to ‘encourage entrepreneurship’, to ‘promote cautious risk-taking’.  In short, to loosen the reins.  Delegating decision-making in this way needed new monitoring and reporting systems to be imposed, but in general the businesses coped with that, enjoying their own increased authority and sense of power.

I reckoned that it then took around three or four years for HQ/Head Office to get nervous: business units ‘doing their own thing’, ‘floating away’, ‘deepening their own cultures rather than the official common culture’ and so on.  So after a time the concertina would heave the other way.  Centralisation: cost-cutting by sharing HQ services (Finance, HR, Legal) rather than each business having its own; bringing the business heads onto an enlarged Main Board (which always went down well); or promoting some of them to higher HQ roles.

My own work in BAe and Tarmac had to adapt to those swings.  By developing managers and using business schools in UK and France to deliver tailored courses, the senior business unit heads and the HQ execs were brought together away from the office.  The purpose was to break down barriers, to encourage sharing of problems and expertise, to build trust between them and especially with the centre, to think more strategically, and to adopt common practices as far as possible.  Those were the constant imperatives whichever way the concertina was heaving.

Year by year as things moved backwards and forwards, longer-term employees would become cynical: ‘”We’ve seen it all before”; “Yet another restructuring”; and “Yet more reorganising” – just a façade: ‘change’ masquerading as ‘progress’.  And that’s where Petronius and the Satyricon would be quoted, though few would know the origin.  Here it is again: “We trained hard … but it seemed that every time we were beginning to form up into teams we would be reorganized. I was to learn later in life that we tend to meet any new situation by reorganizing; and a wonderful method it can be for creating the illusion of progress while producing confusion, inefficiency, and demoralization.”

It seems that the Prime Minister and his trusted comrades will soon be embarking on a significant reorganisation of our civil service.  Let’s hope it works.  An illusion of progress is not what we need.

Sadly, only recently did I discover – if you can trust the internet – that the words weren’t from Petronius at all.  It seems that they were attributed to him but were actually written by an American journalist in the 1950s.  How disappointing.  But I do recommend a read of the Satyricon.