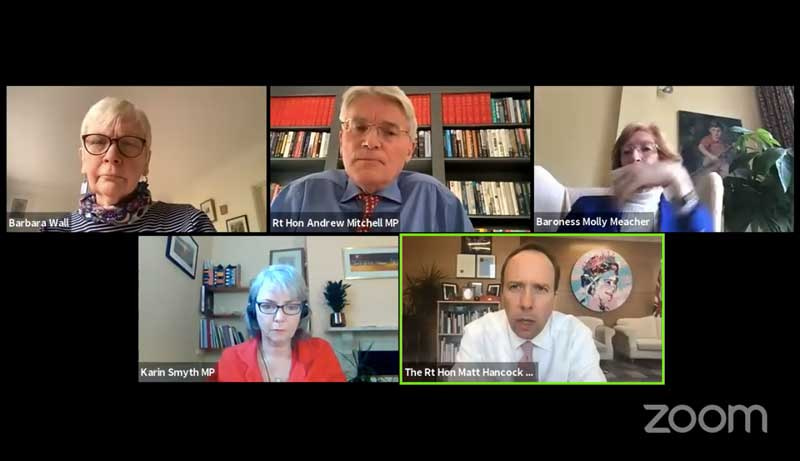 Continuing one of the items from the last blog post, at 2pm yesterday afternoon I received an email from Dignity in Dying.  It said that they had just received permission from Matt Hancock’s office to live-stream the online All Party Parliamentary Group discussion on ‘Choice at the End of Life’, scheduled for 5pm, three hours later.  Not much notice, but there was little else to do here so I watched it.

It lasted just under an hour.  Five people on the screen.  Andrew Mitchell, Conservative MP, leading it.  Matt Hancock, Secretary of State for Health, responding to questions.  A Baroness who said nothing.  An MP who seems to run the Group but wasn’t involved in the discussion.  And a member of the public who described the tragic end of her father’s life.  Andrew Mitchell asked his own questions and other questions supplied by MPs who presumably were watching it, as was I.

What can I say?  Credit to Dignity in Dying for managing to get the thing discussed at all.  A passable performance by Andrew Mitchell.  A dreadful performance by Matt Hancock.

I make no political point here. In these 206 blog posts I’ve steered clear of political comment.  Also, I don’t like saying negative things about individuals in public, and I don’t think I have.  The point I would make though, is that this is a vitally important subject.  In more than one sense it’s a matter of life and death.  Given that it’s sensitive, one might expect a Minister to be cautious and project a non-committal approach, but the meanderings and inconsequential platitudes of our Mr Hancock were truly dismal.  Whether the meeting has moved anything forward I doubt.  We’ll see.

It lasted almost an hour,  For brave souls, the full talk is here.  The most impactful part was Barbara’s account of her father’s death.  If you’re interested, it’s here.