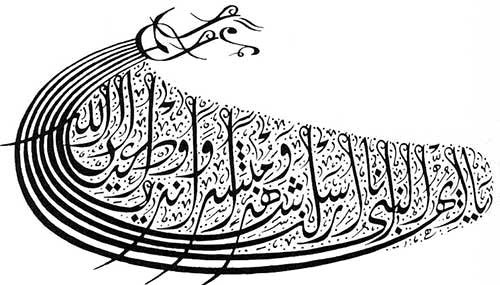 I think the first time I saw Arabic script was probably during that memorable student trip to Turkey in 1968, being also the first time I’d entered a prison.  Interested in the prison story?  If you haven’t read it, it’s in the blog entry of 29 April 2020 and here.

Can there be a more beautiful written language than Arabic, endlessly varied, flexible and elegant in style?  Artistry to please every writer and reader.  Artistry to create any design and fill any space and shape, such as the picture at the top.  The term ‘calligraphy’ (Greek: ‘beautiful writing’) could have been invented for it.

For me, two continuing disappointments: I can’t read it or write it.  And the other one is that I never really mastered the spoken language.

When I left Saudi Arabia in 1987 after eleven years, friends gave me a number of gifts, as did the Royal Saudi Air Force for whom I had worked via British Aerospace.  One piece, definitely from friends and definitely NOT from the RSAF, is this:

It’s a piece of printed card 11″/28cm square.  On the other side are farewells and good wishes from friends in that other large compound where I spent so many social hours, including helping in the illegal church.

This card really does show the intricacy and beauty of the Arabic script.  Isn’t it a superb piece of calligraphy?  I think so, anyway.

I can’t read it but I do know what it says. The reason why the RSAF could not have given it to me is this:  it’s the Lord’s Prayer.