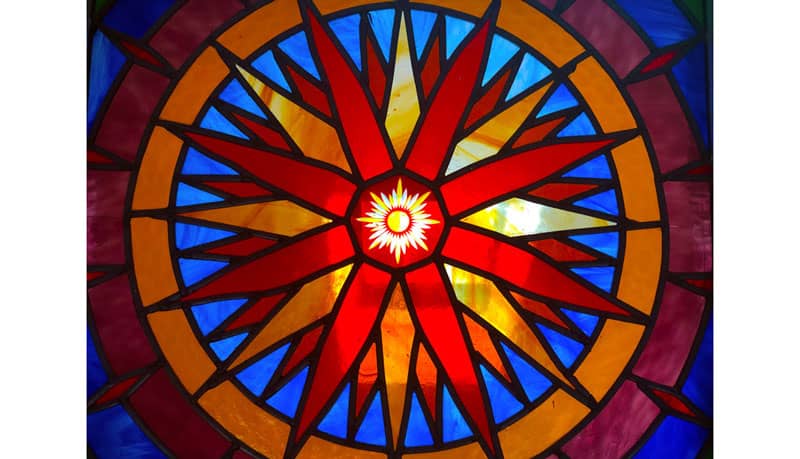 On a wall above my internal staircase are these:

They are shadow puppets, characters in the Wayang Purwa, the shadowplay of Indonesia. Each panel is about 96 x 36cm.

Anyone visiting Indonesia and some other Far East countries might well have been treated to a performance, accompanied by the polyphonic music of a gamelan orchestra.  Here is a short summary from a local handbook:

“The shadow play is the game of life, where our visible deeds are reflections of it.  It symbolises the peace of the inner world in the microcosm sphere.  These shadows were the original cause of the physical man, the eternal patterns after which he is built.  Herein lies the deeper meaning of the wayang, and it shows the reason why the ancient leaders of the Indonesian people chose the shadowplay as a means of moral instruction upon a mythical base.  The masses are taught the ideal of moral life, but the individual is taught the inner life.”

Well, that must mean a lot to Indonesians, but it’s probably not what Shakespeare had in mind: “Life’s but a walking shadow, a poor player, that struts and frets his hour upon the stage, and then is heard no more. It is a tale told by an idiot, full of sound and fury, signifying nothing.”

Notwithstanding which, they are beautiful.  I bought them in Java, in Yogyakarta in the 1980s, at the same time as the Kammavaca (blog 30 July).  The merchant there told the same story – that the Sultan of Yogyakarta was selling some of his treasures.  Whether that was true or not I never knew, but these were very definitely superior to most shadow puppets on sale.

They are cut from uncured leather of water-buffalo skin, and the silhouettes show the most intricate pattern of cuts and ‘holes’.  The really striking feature however is the main rod, the larger central one, not those that move the hands. [‘Rod’ isn’t the best word by the way, but I can’t think of a better one].

In most wayang on sale to tourists and others the rods were made of wood.  If you look carefully you’ll see that that main rod goes up through the centre of the body, through the head and onward, twisting and spiralling to the very end of the hair or headdress, the top.  Wood can be fashioned in that way.  These are not wood. They’re bone, one piece of bone.  How that is done I’ve no idea, but it’s very impressive. To see it more closely hover your cursor over this picture.

I brought them back from Java and had little idea how to display them until the idea came to try a museum.  From 1970 to 1997 the Museum of Mankind, in Burlington Gardens near Regent Street, was an exhibition space for the Department of Ethnography of the British Museum.  They took in the puppets, constructed wooden frames with cushioned centres, inserted small wooden pin holders, and provided pins.  Very satisfying.