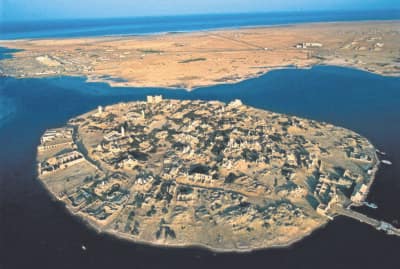 Just to prove that ‘anecdotage’ could apply to DP, here are a few random sketches that he sometimes throws into conversations, especially if they’re about history:

Narnia:   I read the C S Lewis books a long time ago but frankly can’t remember much about them.  The one place on earth that makes me think of Narnia though is Suakin on the Red Sea.   It was the main port until Port Sudan was built further north in 1905; and the British finally left in 1922.  What’s so special about it?  You walk to it across a causeway and enter a dream world, a whole city totally deserted, empty, crumbling, in ruins, on an island.  The picture at top shows it.  When we volunteers visited it in December 1969 there was only one inhabitant, an old man living in the best ruin and offering a floor to sleep on.  No

electricity, no water except the sea – but great swimming.  We stayed there for four days, going back to the mainland to get tinned food.  We walked the empty streets, entered the empty buildings, climbed precarious stairs inside, and knew that we were entirely alone in the city, a ghost town.  Walking into an office one day I found an old desk, ledgers, and dozens of loose papers lying around.  I should have taken some papers away as mementos.  It had been the office of Gellatly Hankey & Co., shipping agents.  Everything was in neat handwritten copperplate, recording voyages, itineraries, passengers, different status cabins, prices and so on.  They’d simply been left there at least half a century earlier.  Eerie.  The small pictures are my own.  Is there anywhere else on earth like that?

Ancient Rome in Africa: my work in the Libyan Sahara in the first half of the 1970s allowed occasional breaks in the capital Tripoli, e.g. the Mohammed Ali experience blog 30 April.  It was always nice to wander through the arch into the Old Town, the covered souk, the covered bazaar, typical of so many – the maze of narrow streets with countless different traders and countless different things being traded. Isn’t it interesting how one can have a sense of something unusual, something you should

know about, but something you can’t identify?  It could be a smell, a sound, a sight.  Finally it dawned: it was a sight, a number of sights.  Semi-consciously I’d been registering the fact that many of the buildings in the bazaar, and in particular the corners of the tiny streets, were constructed with stone columns, Roman columns, probably 1500 years old.  Then it became a hobby, criss-crossing the bazaar time and time again, searching in Sherlock Holmes mode.

Caribbean embarrassment?  The recent furore about monuments brought to mind a plaque on the seafront of a Caribbean Island.  Most of those islands I don’t know well but one I certainly do: the Commonwealth of Dominica,

not to be confused with the Dominican Republic.  Most tourists stop off for a few hours during a tour of the islands, but I have friends there so it was always the sole destination: I made it my home, having visited it six or seven times, each time for three to six weeks, and staying in the only remaining colonial, wooden house on the island.   On the harbour promenade in the capital Roseau there’s a small monument recording the re-opening of the bay front in 1993. The formal opening was done by the Prime Minister of Dominica and the British Minister for Overseas Development.  And at the bottom are the words: “The British were here, thank God”.   How did that happen?!!  And is it still there, I wonder?

British Gardens: One year there was a visitor to the old colonial house, an American businessman who joined us for a few hours over dinner.  He was a very pleasant and mature individual and he’d ‘done the world’.  One thing I remember him saying, with much warmth, was that whatever country he’d visited that had been under British rule he always found excellent botanic gardens.  For him it was one of the trademark legacies.  The Gardens in Roseau were first class until Hurricane Maria in 2017, which devastated the island.  I played a minor part in trying to restore them, but that’s a story for another time.  Anyway, the American’s observation was an interesting one for me.

The Travelling Stone:  The Tyburn gallows, where people were hanged in public in front of huge crowds up until 1783, was located near today’s Marble Arch at the southern end of the Edgware Road, 5 minutes’ walk from my home.  Further up the Edgware Road there had been a way-marker, a stone that told travellers they were half a mile from the scene and, importantly, that they would have to pass a toll gate: hangings could be lucrative.  Ten years ago that stone stood in the window of Lloyds Bank, in approximately the same place.  It’s now a coffee shop, so not the best place to remind people of those events.  Two hundred yards further north, it can now be seen in the entrance to the huge London Hilton Metropole.

Strange Shops.  Al Khobar, the town nearest the Saudi airbase where I worked in the ‘70s and ‘80s, was developing quite fast at that time, with large American supermarkets and plush hotels, and connected to other towns by 4- or 6-lane highways.  Old shops remained however, often small and selling the widest array of products.  The most bizarre, I thought, was in a sort of concrete cave in an old wall.  It might have been a husband and wife team, but whatever it was they were offering two products.  Seen from the street, on the left they were selling lace; and on the right they were doing arc welding.  Beat that!