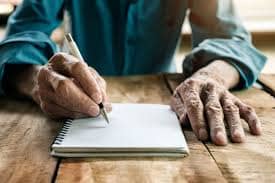 A rather nice word has entered into my idiolect, my personal range of vocabulary and way of speaking.  It appeared recently in letters to the editor of a national newspaper and it generated a bit of correspondence.  It’s ‘anecdotage’.  I’d not heard it before but it’s easily understood.

For my non-Brit friends, ‘dotage’ describes the condition of an elderly person with perhaps some loss of mental faculties; and an ‘anecdote’ is a short story that someone adds to a conversation to illustrate a point they’re making.

Oh dear, thought I.  Does this describe me?   Am I entering garrulous old age?  Is that what the blog’s about?   Well, there have been some short stories but most have been quite long.  Whether the mental faculties are suffering is anybody’s guess but my own guess at the moment is ‘not much’.

Actually it’s humorous.  I’ve no objection to anyone saying that DP is in his anecdotage, even though 72 years of age isn’t really old as far as most of us are concerned.  It’s a comfortable word and harmless.

Perhaps to avoid that though, here’s a mega-anecdote, much more than a short story though I’ll try to make it short.  It’s about a disaster.

Scene: mid-1990’s, I’m Director of Management Development, Tarmac plc.  Head Office near Wolverhampton.  Fine summer afternoon.  Driving to a lovely country house in Shropshire where young high-potential managers were to give presentations to the Main Board to demonstrate their talent.  Highly nerve-racking for them, and a little stressful for me because I was responsible for the event and I wanted them to do well.

I always try to arrive very early for such events, to make sure everything’s in place.  And so, dressed in best suit, good shirt, nice tie, highly polished shoes, and driving the company Rover saloon, feeling positive, I noticed that the car was a bit muddy so decided to call into a car wash near my home, one of those that close around you front and back and then ease the car forward through the different applications, in darkness.  Drove in, pressed the button to open the driver’s window, put in the coins, car wash doors closed behind me, pressed the button to close the window.  And nothing happened.  The window stayed open.  Furious pressing and pressing of button.  Window stayed open.  Cursing.  Oh No!!

Too late: the rails underneath were inching the car forward.  Then it started.  Torrents of water pouring through the window onto yours truly.  Tried to get across to the passenger seat but it made no difference.  Water, water, everywhere and under pressure.  Then soap or whatever the damn thing was called – smothered in it.  Seats saturated.  Foam all over David.  All over his hair, face, shirt, suit.  Water and soap on the floor and rising.  The Peace backside sinking further and further into the soggy seats.  Blackness all around. An eternity passing.  Then Niagara again.  Water down the neck.  Water turning the soap to more foam.  When Oh when will it stop??!!   Then hot air, blowing hard, congealing everything, turning hair to glue, clots of stuff all over the suit.  Nightmare without end!!

Finally the front gates opened.  Daylight.   Soaked, sodden, drenched, out I drove.  What the blankety-blank was I to do now?

Quick calculation: I could return home, get changed, and drive back. There was time.  So that’s what I did.  Back to the house.  Stripped, showered – long shower, getting rid of everything.  Second-best suit, shirt, tie, shoes etc.  Then what?  Car saturated, rivers on the floor, seats oozing.  Two answers:  (1) pile pillows and cushions onto the driver’s seat hoping they wouldn’t sink into the damp before I got to the country house; wear an old pair of shoes to drive, keeping the second-best pair in a plastic bag; and (2) pray.

So off I drove, sitting on top of numerous cushions with head hard against the roof, and praying to whatever gods there are that I wouldn’t arrive with a very wet backside.  The tight head position started to ease.  Was I happy?  Of course not: the cushions and pillows were sinking, absorbing the waters.  Oh please!  More prayers.  Thumping the dashboard.  More prayers, and some creative curses.

The prayers were answered.  Just about made it.  Changed shoes, eased my way out of the car.  Did a damp-check of all body coverings.  Seemed OK.  Big sigh of relief.  Strode into the country house about 15 minutes before the event, smiling broadly.  Inwardly shivering and cursing.  Brave face for the next two hours of presentations followed by dinner with young high-potentials and the Main Board members.  Event went well.  Even bigger sigh of relief.  No one should go through that sort of ordeal.

So that was it, except for one thing.  During those hours inside, what happened outside?  An almighty thunderstorm.  The heavens opened.  A summer storm, lashings of rain.  And it seemed to me that the accumulated deluge for the whole of Shropshire had been driven through my car’s open window and onto the driving seat.  It was a wet return.

Sounds like a comedy sketch.  In one sense it was.  Even the next day I was laughing at the memory.  But believe me, it wasn’t so amusing at the time.

It’s more than an anecdote though, so perhaps I can escape the label of anecdotage for the time being.