Bleach? No? OK, Sahara then … and creatures great and small 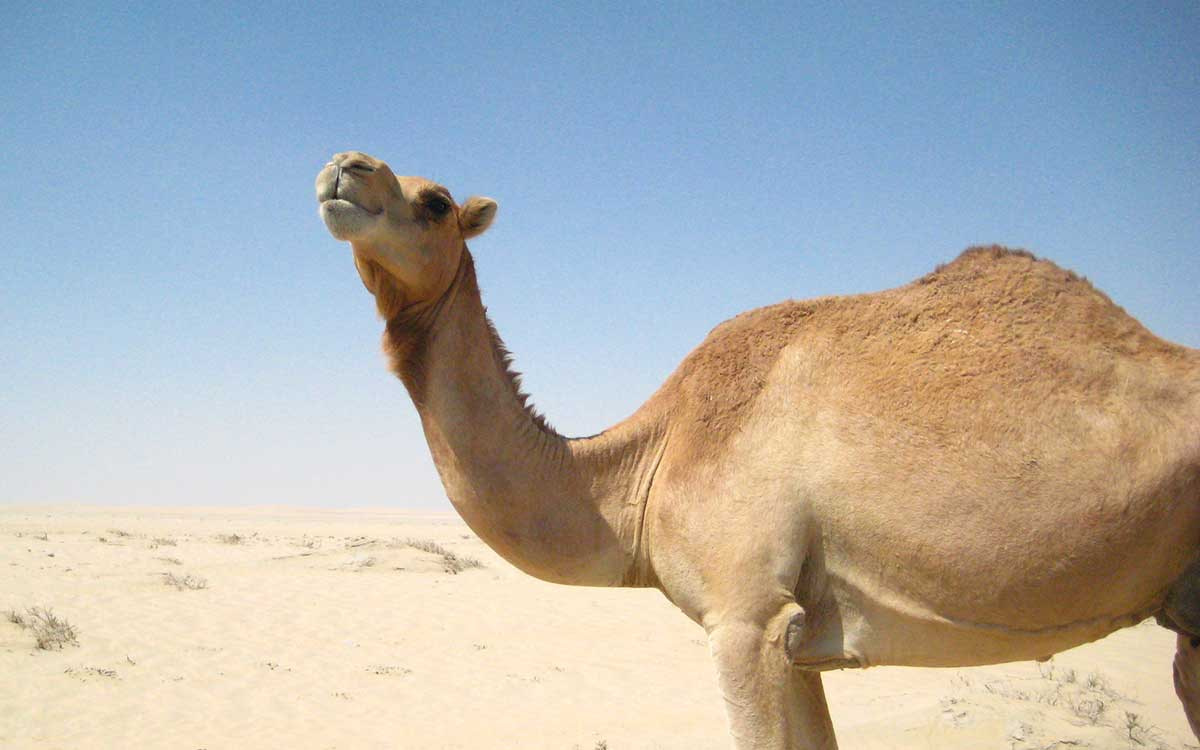 There’s not much news around, local or global; or, rather, there’s plenty of news but it’s about only one thing – the virus.  It’s not that easy to link these jottings day by day with that single theme. Conjuring something from Trump’s suggestion that we could inject ourselves with bleach is so very very tempting.  I’ve tried really hard: surely something humorous can come out of that?!  No inspiration though, so apologies: back to the Sahara, this time with wildlife.

It was a sort of isolation, 42 days in the desert with relatively few people around.  Perhaps I was more isolated than the others, being almost alone in the camp during daylight hours, but in all honesty it wasn’t so difficult; and occasionally there were interesting experiences that the others who were working on the rigs didn’t see.

There were animals for example, and here’s a large one:

One early afternoon 27-year-old David trudged over to that concrete-block classroom which hardly anyone attended (v.12 April blog).  Sand was everywhere and it needed sweeping.  Mid-sweep I glanced out of the window on the far side, which was out of sight of our trailers.  A few metres away was a camel, standing still and quite alone.

That was unusual.  I have no memory of camels in that part of the desert.  This one was obviously wild and not part of a herd.  It turned its head to the window a few times, saw me, but didn’t seem nervous – but then how would I know if a camel was nervous or not?  Nevertheless it was strange that it was there and that it hardly moved other than to walk slowly in a circle a few times. Most odd.  Finishing sweeping, I went back to the trailer and, curious, returned about half an hour later.  Then it became clear: she was giving birth.

It took a couple of hours, agonising hours for the camel and frankly for me too. Not having any idea what would happen, or how or when, I went backwards and forwards between classroom and trailer. The calf emerged oh-so-slowly, hooves and head first, the mother standing all the time.  It seemed interminable but I was there, fascinated and mesmerised, when the calf finally dropped into the sand, covered in its amniotic sac and now covered also in sand.  Although Mother had positioned herself so that the calf was in her shadow rather than under the burning sun it still seemed to be a terrible start to life; but I suppose it was also a natural start to life, for a camel.

Exhausted, I needed a break!  A cup of tea back in the trailer did the trick, and Jack who had been working on the rusty CPS joined me. We both then returned to our desert maternity ward and watched for probably half an hour as the little one writhed in the sand, then lifted its head, then stretched its legs, then tried to stand but collapsed, than tried again and collapsed, and again the same, and finally, shaking all over, stood up.  Then it collapsed again, and continued the struggle as Mother started to clean it.

When we left finally the calf was standing, shaking but balanced, and enjoying its first milk.  The next morning mother and calf had disappeared.

Then there were the small creatures.

Before I arrived in the camp in 1973 the men had built a tiny pond in the middle of our square of trailers. It was about three metres in diameter, fed by a pipe, sealed underneath by plastic, and held in place by rocks surrounding it in quite an artistic way.  At times the result was astonishing: seemingly from nowhere birds would swoop down, drink, flutter around washing themselves and, if there was no sign of human movement, perch on the rocks.  They were of course migrating in one direction or another and had spied this tiny oasis in the vast extent of barren, dry desert.  I would sit on a step outside my trailer door, reading and just watching:  birds of so many types, and so welcome in such a place.

I ask myself now: we had five or six 21-day leaves a year, so why didn’t I ever take a book to identify the birds?  And why on earth didn’t I have a camera? Not the only missed opportunities over the decades!

There were much smaller creatures too.  Over the almost three years I was in the Sahara it rained perhaps twice a year, each time for around ten minutes. The first time it happened seemed miraculous: within the hour there was a green sheen across the sand, long dormant seeds had sprung to life, and tiny beetles could be seen. One of the oil men told me to be careful – there would be snakes – but that was after a couple of beers so I rather doubted his seriousness.  Nevertheless the change was dramatic and unforgettable.

There were other creatures too.  One in particular landed me, for the second time in my life, in London’s  Hospital for Tropical Diseases.  That’s for tomorrow.