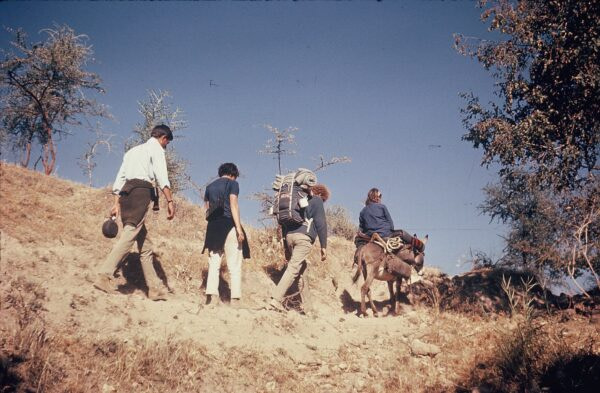 To reassure anyone who’s wondering, this blog is not going to turn into a “Let me tell you about my holidays and show you my snaps” site.  It’s multi-purpose as I’ve said before.  For my own pleasure I’m recording a few things that might be interesting to friends, might be new to them, or might possibly be rare or unique: what it’s like, physically, to suffer MND/ALS for example; or perspectives on life by someone who has a terminal illness; or views on current events; or experiences that few if any have had, or will have, during their lifetimes, such as the White Nile trip (blog 7 May), and now Darfur.

So here’s how the trip went once Malcolm and I were on the train, chugging slowly westward to the end of the line, Nyala, where we hoped Pat would meet us.  This is from Pat’s and my memories and from letters to our parents; and yesterday’s and today’s pics ‘show it like it was’.  This might be long but I’ll try to canter through it in sketch mode, from 20 December 1970.

Malcolm and I had reserved sleepers, first class cabins, still old British customs and standards, dining car – all faded but marvellous. Train packed to overflowing.  Surprise: VSO Hugh with French volunteer Pierre, both from Port Sudan in the far east, Red Sea coast, had decided to do the same, and three other westerners.  Two had to sleep on the roof.  Two days slow train.  Distance: over 800 miles.  Arrived Nyala 3.30am.  Only one hotel, which we checked into.  Pat had made it to Nyala, staying with the family of a student.  Hadn’t received our recent letter or telegram so was just waiting in hope.  She came to our hotel to discover not two but seven other men.  All made merry, in great spirits.

That morning, checked by police and army.

Pat went shopping: apparently no large souks ahead so bought mostly tinned food, though we learned we might be able to get live chickens later. She was planning Christmas dinner!  We met Ahmed, her friend with the Ford pickup.  We set off, up and up into Darfur, four inside and four sitting on our rucksacks and cases in the open back.  I recorded it as the most hazardous drive ever (but that 23-year-old hadn’t done so many), that we were in great spirits, and that we passed the time singing.

That night Gollol, a village in a forestry plantation above a waterfall.  No electricity, just kerosene lamps; no food available so we raided some of our own provisions.  Sudanese plantation head (with forestry degree from Aberdeen) found a trek guide from the labourers.  Next morning we started walking.  Plan slightly changed: decided to walk six hours up to Taratonga village; following day, Christmas Eve, another six hours to crater lakes and top of mountain; sleep there; back down Christmas Day for Pat’s dinner in Taratonga in the evening. That was the plan, anyway.

So the eight of us plus guide set off early while it was cooler, with rucksacks and shoulder bags, enough food for three days and – my letter home adds – no change of clothes.  Next sentence in my letter, “And that was when things went wrong”.

The guide was useless.  We walked for 9 hours in the blazing sun (it was hotter than we’d imagined) with rucksacks, up hills, down valleys, almost 20 miles.  We could see the mountain but we weren’t getting nearer.  He never knew how far away the next village was.  We became tired, annoyed, worried.  Pat was suffering: limping, and heels bleeding.

Decisions needed.  Passing through a village we

managed to hire a donkey; loaded two rucksacks on it; Pat sat on top; and onwards we trudged, exchanging packs on the donkey from time to time.  On steep inclines donkey tended to jump;  Pat could only hold on to its cropped mane, so came a cropper a few times.

A little later just before sunset, fed up with aimless wanderings and unwilling to trust the guide, about 5000ft up and 15 miles from the nearest road, we came across a small settlement, about 20 grass huts near a cold stream.  We decided we wanted to spend Christmas there, and we did.

Guide spoke to village head man; grass hut was cleared at the edge of the village; all eight of us squeezed in, cosy; villagers made a fire outside; we sat round it under a clear, starry sky;

Christmas Eve, Christmas carols (who knows what the residents thought!); village women brought us soup, approaching on their knees.  Christmas morning clambered down to the stream to wash and drink (ice cold water).  Breakfast, Sudanese porridge and grapefruit.  Spent some hours wandering  around.  My letter says we were feeling well other than having cracked lips.  That evening Christmas dinner round the fire: potatoes roasted in the fire, tin of pork luncheon meat, tomatoes and bread brought by the villagers, boiled beans, tinned pineapple washed down with share of two half bottles of whisky. Large quantities of tea; joined by locals; all of us drinking from just two one-pint enamel mugs.

Boxing Day, long walk back by different route; guide got lost twice; we sensed the right direction; got to Gollol late afternoon; much-needed showers provided by same head of plantation, who also gave us a delicious dinner of roast lamb.  We reckoned we’d walked 40 miles in two days.

On the morrow Ahmed took us all back down that ‘hazardous’ route to Nyala in his truck.  We spent a day resting there.  Then the train arrived. This time we all had seats or cabins, Pat in a sleeper.  Two slow days to Kosti and then Sennar where most of us got off.  I showed  them the area and later they took a lorry north, the 200 miles to Khartoum.  That was it.

Just a few observations that I noted about our Christmas village: a humble community living in grass huts; young children who’d never seen fair-skinned people before; a family who moved out of their hut for us; an area on the edge of the village with precise geometric patches on the ground, each around 3×3 metres of different colours

–  red, orange, green, yellow – peppers and suchlike; people who, by our standards, had nothing and yet shared with us their food and tea; organised laundry down in the river; everyone hospitable in the extreme, and to strangers.  What words sum it up?  “Primitive”?  In one sense, yes, in comparison to western comforts, but not in human terms.  At the time I decided “civilised”, and on the train back we discussed that in our youthful way.   It’s all semantics of course.  As Professor Joad in The Brains Trust (that ages me) used to say, “It depends what you mean by …..”.  Well, “civilised” did it for me.

I could write more but this is enough; it’s only a blog item and it’s longer than intended.  My great thanks to Pat for sharing her notes.  I’ve enjoyed writing it.  We hope it’s been an interesting read.  Up in those remote hills there’d been difficulties but none of us regretted the adventure.   It was a Christmas truly to remember.  “Darfur” has such an ominous ring these days.  To us, then, it rang bright and clear – despite the guide.  It was a wonderful place.

[The pictures, in case anyone’s interested: Pat’s on the donkey, and I’m at the back of the trek, and standing on top of the truck, and pretending to keep the donkey under control, and we’re both with Malcolm and the others outside the hut – with a mountain rather a long way away]