Mulling ….. and just a little more about MND 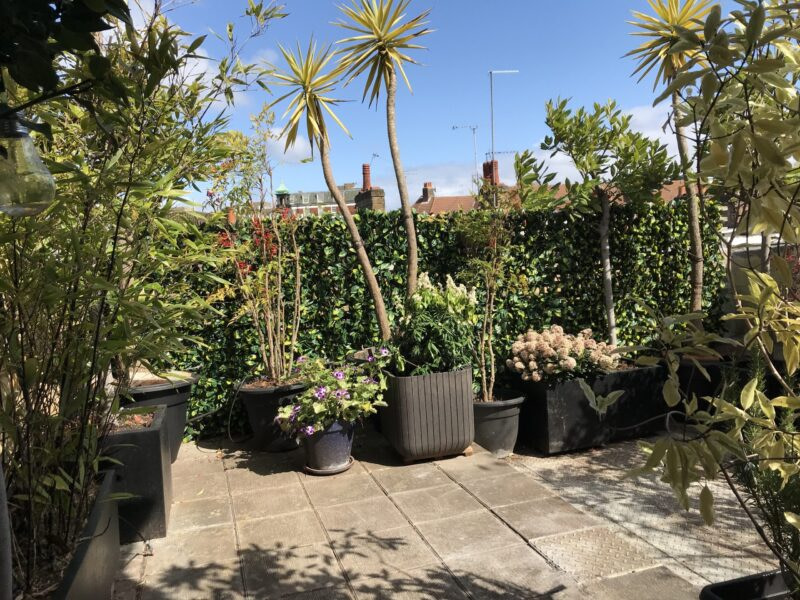 I was sitting in my roof garden yesterday, a beautiful day, warm, quiet, calm, with London air the cleanest for generations, and I was mulling on a remarkable turn of events.  The illness has made it increasingly difficult for me to socialise – the speaking is slow, strained, rough and slurred; and eating, drinking and swallowing are risky though I’m managing.  As a result, a few weeks ago, I decided with regret that for the rest of my life there would be no eating out in restaurants, pubs, cafés or in others’ homes (unless they’re very understanding!).  And now, amazingly, the whole nation is in a similar state – socialising at an absolute minimum and no eating places available anywhere, in Britain at least.  What an extraordinary coincidence.  I suppose that in some way it helps me not to feel especially isolated, because we’re all isolated.

Then the mind turned to other bits and pieces about MND/ALS and how it’s affecting me at the moment – just a few things that I didn’t put in the 5-page attachment on the 18th and which it might be worth recording. They might help friends or anyone else who’s involved in the illness in some way.  After today there probably won’t be much more about the illness for some time. I certainly hope not anyway.  So here goes:

– There’s no pain.  To anyone listening to me speak, or cough, I know it sounds awful but this is to reassure them: there is no pain.  I’m told that even when the illness takes over the whole body there is no pain other than cramp as the muscles atrophy; and that can be treated.

– The little patch I’m wearing behind an ear seems to be working: it’s drying up the excess saliva in the mouth.  Noticeably the skin on the hands is drier also, but moisturiser helps.  One side-effect: I’ve never been a good sleeper but these nights six or seven hours of deep slumber are the norm. It has coincided exactly with the patches, and is a known side-effect.  Frankly it makes me a little uneasy because I wonder what else is happening to the body, and it takes quite a while to get moving in the mornings, but I suppose it’s better that than restless nights.  Each patch should last about 3 days and I renew the prescription online, 4 patches at a time – very easy.

– Just before Christmas I was helping to decorate a Christmas tree; carols were playing in the background, and someone said something funny so I started to laugh. Then, shockingly, the laugh turned to sobbing and I couldn’t stop.  What on earth was happening?  I wasn’t feeling sorry for myself; there was no sadness in the air; I’m pretty robust emotionally; and I hadn’t and still haven’t suffered depression.  Basic research: it’s the ‘pseudobulbar affect’ which can occur ‘secondary to a neurological disorder’.  It’s happened twice since then, each time triggered by something said.  Now however, as we are all locked down and as I live alone, it hasn’t happened again, not even when something funny or sad appears on the TV or in a book or in the mind.  It was quite alarming – losing control is not my way – but it’s obviously part of this strange thing called MND/ALS.

– MNDA, the Motor Neurone Disease Association, has a huge amount of information and practical items to offer, most of which I feel I don’t need at the moment. Three things I have though: in my wallet there’s an MNDA card to alert anyone; for the same reason I’m wearing a blue rubber wrist band  which tells medics or emergency services that I have MND and that ‘I may be at risk with oxygen’ – apparently extra oxygen upsets the balance with carbon dioxide and that could be dangerous for those with MND/ALS; and thirdly I have a supply of MNDA note pads pre-printed with the phrase: “I can understand you, but have difficulty speaking: please read on …” for the time when I will finally lose my voice and will have to write down what I want to say.  And as I mentioned on the 18th there’s also the software on the iPad which should be able to reproduce something resembling my voice.

– Westminster and the NHS never cease to amaze.  Early last week the phone rang: it was a Westminster service checking on my condition and suggesting they deliver a remote-controlled bath chair which would lie permanently in the bath, fixed just by rubber suction pads.  With a press of a button it rises to bath edge level, I sit on it, and with another press of a button it lowers me down into the water.  Now, I am perfectly capable of having a bath without that, so I needed a bit of convincing.  In the end I agreed however, on the understanding that it could be removed and taken away if It didn’t suit me.   Three days later it arrived – a man came up into my flat with the gleaming white contraption. Distancing, I sat in the living room at the farthest point from the bathroom and within 3 minutes he’d assembled it, left the instructions, and departed. Remarkable. The results were quite humorous:

– I’m 6’2″/1.88m and the bath is standard size.  I have a bath most evenings, and to soak in it I lie more or less flat with head and knees out of the water, or else I sit up with knees in the water.  Neither were possible with the bath chair.  At its lowest point, with a full bath, water covered the ankles and a few inches higher, plus the waist area (if you see what I mean).  Legs and torso were permanently out of the water, 80% of me remained dry, and there was no chance whatsoever of sliding down.  So having pressed the ‘UP’ button I was elegantly deposited back to the bathroom floor, somewhat disappointed.  The next day I removed it and it’s due to be collected.  No regrets; worth a try; and full marks to Westminster and the NHS for offering it.  Really remarkable.

That’s about it.  There’s nothing more that’s relevant to the illness, I think.  If anything significant changes I’ll describe it here for the record, but so far it’s still mainly bulbar.

So, back to the lovely roof garden.  Yes that’s it, top right