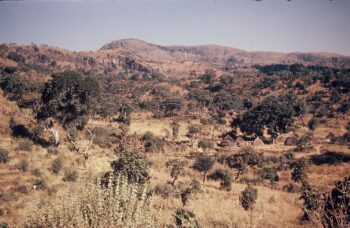 There is much beauty in the far west of the Sudan where the land rises: uplands, mountains, cooler temperatures, verdant fields, hills, valleys, forests, clear streams, occasional snow, villages and settlements, grass huts, a rural economy and, in normal times, friendly and hospitable people. These days Darfur is known mainly for the violence inflicted upon it by Sudan Government militias in the last 20 years – hundreds of thousands killed and more than a million children killed, raped, wounded, displaced, traumatised or left without parents or families.

In December 1970, a very different time, we decided to go there, to the Jebel Marrah area, to climb one of the mountains and to spend Christmas Day on the summit.  A more remote Christmas we could hardy imagine.

We were to be three. The train from Khartoum, steaming south, would pick me up in Sennar Junction on the Blue Nile, turn west across to Kosti on the White Nile where my old college friend Malcolm would embark, and we’d then chug onwards for another two days to the end of the line, Nyala, still in the lowlands.  Pat, VSO teacher in Geneina up in the extreme west of Darfur, the border with Chad, would make her way east and down to Nyala and wait for us there.  And Pat would have arranged some sort of initial transport and a trekking guide.  It would take almost two weeks.  Such were the plans, all done by letter and occasional telegram.  Did it go to plan?

In almost every respect it didn’t go to plan, but what actually happened still provided us with a trek and a Christmas of a lifetime.

Another thing that didn’t go to plan was the writing of today’s blog.  There were I.T. problems, and a new emergency alarm system (my MND) was tested and didn’t work.  It took some hours to fix both, and I ran out of time.  Tomorrow, normal service I hope, and more on the Darfur trip.