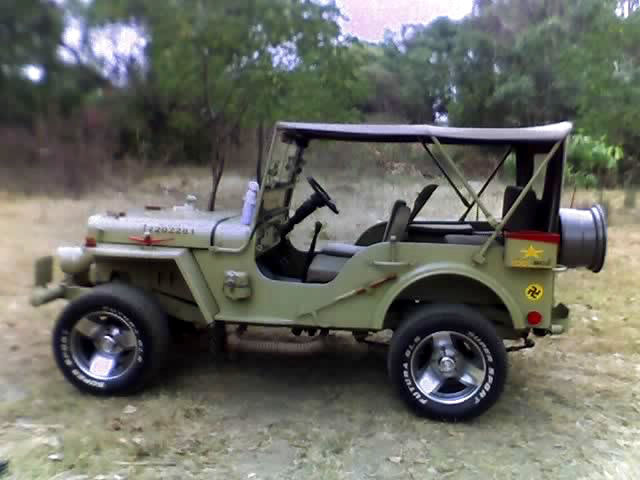 Well, it was the mid-1980s and yesterday’s guide book quotes were about the Lake Batur region below the Gunung Batur volcano (previously last erupted 1963), in Bali.

It’s a delightful island – need I say that? – but it has its dark side; or did.  On one of the round-the-world trips I’d stopped off on the island, had stayed for a couple of days in Kuta on the south coast, Kuta then beloved of Australians and more or less anyone who wanted ‘a good time’.

The real agenda though was to go up into the island, north to Ubud for the monkey forests and especially for the colonies of artists, dancers, musicians, weavers and carvers.  Preferring self-drive rather than squeeze with half a dozen others into a tiny 3 or 4-wheeled bemo,  I hired the cheapest 4-wheeled vehicle around: an old open-top, open-sided jeep such as in the picture above.  Driving up from Kuta was a delight, waving at the village children and their parents en route.  Two days spent there, bought a few small paintings, looked at the monkeys, listened to the gamelan band.  Wandering alone along a path, met an old Balinese man wearing a coolie hat who wanted to speak.  We tried but he was disappointed: I couldn’t speak Dutch.

Reading the guide book, Lake Batur further north sounded enchanting.  Up and up through more villages to the lake beneath the crater.   Plenty of warnings about the people, and serious advice not to stay the night but as I was now almost half-way there it would be easy, surely, to get up to Kintamani on the ridge of the lake, and back again.  Only 23 miles, 36km each way.

So I set off at lunchtime in the shaky old jeep, open top and sides, on a reasonably smooth road going north through the centre of the island.  Just as on the way to Ubud, the children smiled and waved, villagers smiled and waved, and I smiled and waved.  All very jolly.  It changed though.

After a few miles on quite a steep slope I noticed that the children and adults weren’t smiling or waving.  They were just staring at me.  Pinched faces, direct stares.  No sense of anything friendly.  Then the road changed: the smooth surface turned into cobbles, and then into stones, and then I found myself weaving left and right to avoid rocks and holes.  Very little traffic.  Jeep moving at about 5 miles an hour, and time passing slowly with me wrestling with the gears and steering wheel to keep the thing going.  I didn’t want a puncture and I definitely didn’t want to stop.

Interesting how something can sit in the consciousness but take a time to get to the surface.  I sensed that the schedule – up and down the same day – was in jeopardy but the target was still the target, and that masked the problem of the increasing delay.  Finally it surfaced: it was too late to turn back.  I had to keep going, and I’d have to spend the night in Kintamani despite all the alarm bells ringing out in the guide book.  So with a deep breath and continual gear changes, David and Jeep continued bouncing up hill through hostile territory, virtually alone on the road.  I stopped once, hoping no one was around, to cover top and sides with the canvas.  They offered zero security but might slow down someone trying to snatch the luggage.

We reached Kintamani on the ridge over the lake as the sun was setting.  Lake Batur, from what I could see of it, was certainly beautiful and I looked forward to driving round it the next day.  Also a rather grand backdrop: the great volcano, Gunung Batur.

Two things needed: somewhere safe to park and stay the night; and somewhere to have a healthy meal.  Both proved impossible.  It was black, under the stars.  No street lights; there seemed to be very few electric lights; stalls on the side of the single road were lit by kerosene lamps.  The jeep’s weak headlights were enough to show the perimeter road and the villagers and some of the dogs, barking wildly.  First thing was to stop – danger? – and to ask at a stall.  Should have added that there were no westerners to be seen;  I was the only one to be seen; and I was probably seen as a man with a number of valuable items that could be stolen.  So, risky.  The locals were cold.  One man just pointed along the road and gave a name.  I drove on through the blackness and found it.

A small concrete and breeze-block single storey building.  A woman, impassive, who showed me a room: concrete walls and a bed and chair; and a price; and she wanted the money now.  OK.  Done.  I brought in my luggage and as she walked out I asked for the room key.  No key.  What?  No key.  Take it or leave it.

Friends, that was the lowest point.  Despite all the warnings, I’d ended high up in a hostile place which any tourists had wisely left hours ago; with a car that could be taken or have its tank damaged; an unlocked room to store the luggage and where I’d have to sleep; having to walk back with a torch to find some food; and no one to help, no one at all.  I was on my own.

She watched me as I pocketed wallet, cash, passport, airline tickets, knife, binoculars, car key and so on.  Leaving everything else there, and worried whether I’d ever see them again, I walked out into more or less blackness, along the road, past the kiosks, dogs barking, the eyes of everyone on me (and that’s no exaggeration: everywhere I turned the torch everyone was staring at me).  No idea how to get food other than to join the locals at a stall – with pockets stuffed with valuables.  And then the prospect of sleeping in an unlocked room.   It was very very frightening.

Then, out of the darkness, a voice speaking English.  A woman’s voice.  I shouted.  She shouted back.  Where was she?  We found each other.  She and her man friend, Aussie tourists.  What was I doing there?  I explained.  “You can’t stay here!”, she said.  “It’s far too dangerous!”  Well what were the options?  “Get in your car and follow us?!  Stay where we’re staying!”.

I still remember the swell of relief – from a dangerous, totally vulnerable nowhere, to sudden salvation.  Ran back to the place, to my room.  It was locked.  Where was the woman?  Found her.  Unlock it please.  Pay for a second night!  No!  She started to walk away.  I paid.  The bags were still there but i’d no idea if they’d been raided, and no time to check.  Put them in the jeep, drove slowly back along the road to my new-found friends, and followed them by headlights off the perimeter road and down a tiny steep, winding track through thick vegetation to where it stopped.  A wooden building at the end.  Introduced to a sort of inn-keeper who had four rooms; was given a room with a key; and the three of us had dinner.

They told me more stories of dangers and disasters up on the ridge. They’d gone up that night to get some provisions for their drive further up the next day, to the edge of the crater.  We agreed I’d drive with them.  Overnight I changed my mind.  Pretty exhausted, I wanted to get back down to the coast.  They understood so we bade farewell over breakfast.   I had to drive up to the ridge road, and there was the lake (see pic on right), a truly beautiful sight fully justifying any tourist visits.  But certainly not justifying a night up there.  With great relief, Fear Over.