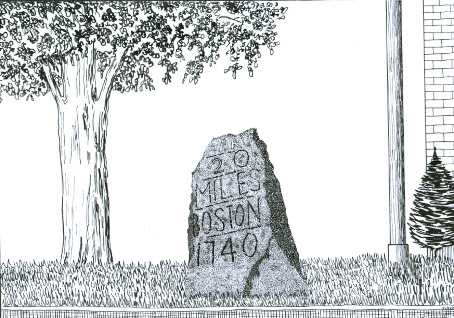 There’s been some discussion in the press about the superior value and usefulness of Imperial measures – stones, pounds, ounces, feet, yards, miles and so on – compared with the metric system.  And plenty of arguments the other way round.  Tedious!  Calm down: this blog entry isn’t about that.

Here’s raising a glass to four of them:

The DP MNDA Fund has hit £20,000.  A generous direct debit a few days ago, plus contributions to the ArtChallenge, plus donations straight to the Fund itself, took us over the mark.  Very very pleasing.  Thank you all.  Now how about aiming for £25k?  Pass it on!

I’m continually surprised to discover who’s reading the blog.  The Comments section gives some indication but I often get  supportive emails and other private messages from people who don’t Comment online, which is really rewarding.  Just looking at the Comments, though, you’ve hit 500.  Well done!

Not sure this ranks with those, but here it is.  Today I took a blood test, self administered at home, to check whether I’ve ever had Covid-19, asymptomatic.  Result, No.  Wouldn’t have worried me if I had, because it would be over now and anyway I’ve had both vaccinations.  For years I’ve been a member of the UK Biobank scheme which periodically tests and checks volunteers for various things in order to identify priorities for national prevention and treatment.  Recommended.

Change of attitude, and quite interesting for me.  Perhaps you can imagine how many mental and emotional hurdles I’ve had to jump over in the last almost-two years – terminal illness, loss of muscle control, loss of speech, hospital operations, reduction in mobility, increasing coughing and choking, loss of independence, effects on personal confidence, pride, dignity, and more.  No sympathy requested; just making the point.  One thing I knew I’d really dislike was being pushed around the streets and parks in a wheelchair, but it happened and one has to get used to it.  Yesterday afternoon Wheelchair Man and van turned up.  I sat in a different wheelchair, pressed a button, held the joystick, and drove along the pavement, across the road, and back again.  What joy!  The return of some sort of independence!  Really hadn’t expected it to have so much effect.  It was a tryout but it looks like I might get the thing in a couple of weeks’ time.  Even then I won’t go out alone because of the speech problem, but it’s triggered an unexpected breakthrough in attitude.  Might even look forward to rattling along the pavement yelling at people to get out of the way!

So there are four milestones of sorts.  No, ‘Kilometrestones’ just won’t do.