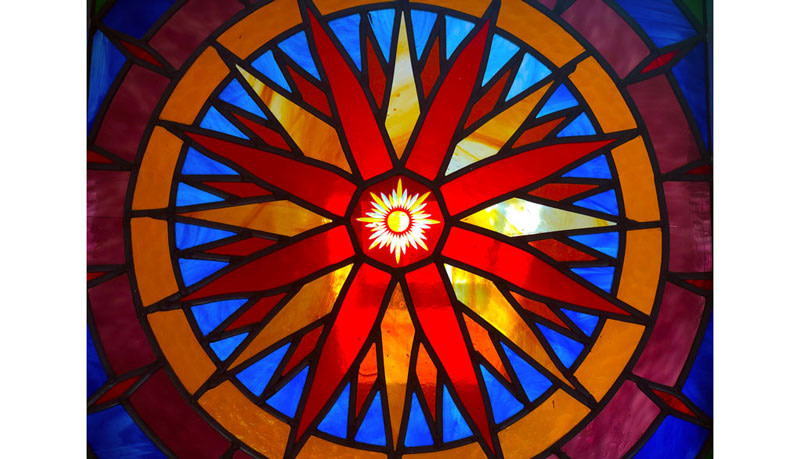 Hanging on a wall near a bookcase is this:

It’s a mythological ‘map’ of the Valley of Tempe which separates Thessaly from Macedonia.  You can see Mount Olympus, the highest mountain in Greece, home of the Greek Gods, and here crowned with the throne of Zeus.  On the peak and in the valley are the altar and temple of Apollo, son of Zeus, and much more.

It’s an Ortelius.  Abraham Ortelius began as a map illuminator, colouring individual maps of different regions of the world.  He then had the idea of collecting them and publishing them as a book. His Theatrum Orbis Terrarum, 53 maps, was published in Antwerp in 1570.  It was the world’s first atlas, the first book containing maps of all known areas of the globe. Hugely popular (and expensive) it ran to over 30 different editions and was published in Latin, French, Dutch, German, Italian, English and Spanish, growing to over 160 maps.

Ortelius added two mythological maps, and mine is one, from the 1590 edition in Latin.  Here’s a short summary from a website on this map of the Vale of Tempe:

“In ancient times it was celebrated by Greek poets as a favourite haunt of Apollo and the Muses. The paradise of Tempe was an historical place of culture, care and lust. On the river banks grows the laurel tree, whose leaves were used to make the victory wreath for the winners at the Pythian games in Delphi. Ortelius drew his data for this view from Ovid, Herodotus, Aelian, Plinius, Herodotus and Varro.”

Seventeen years ago it was a gift to me from a dear Dutch friend (see our little prison story, blog 16 August).  He gave me the Ortelius when I was in Amsterdam.  We were about to take a party of friends to a Caribbean island for a few weeks but sadly, for family reasons, he decided he would have to withdraw.  I went ahead.  Fortunately, ten days later, he was able to join us.

This was a terrific gift, and I’ve much appreciated it.  Interestingly, below it on the wall is a 20th century chart of the Antilles and Virgin islands showing their different silhouette outlines from the sea.  That chart has faded badly. The Ortelius is as fresh and vivid as the day it was produced: a super work of art and mythology, with a great pedigree.  I’m most grateful.