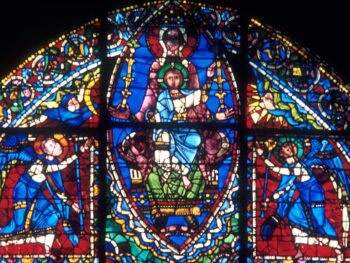 I fell for it.  See the 5 April note to myself: must avoid “ponderous purple prose”.   To my mind yesterday’s was p.p.p.  It was too big a subject for such a little blog.  I knew what I wanted to say but I didn’t say it; and I ran out of direction and time.  Keep it simple, David.

So, a change of style – let’s call it ‘sketch mode’.  Subject: Church.  Current link: to open or not to open, pressurised by the crisis.  Past link: running a church under a different pressure: when it’s illegal.  Scenario: Saudi Arabia (SA), the Custodian of Islam.  Period: 1970s and 1980s.  Picture this:

All religious practice is illegal except Islam.  Expatriates generally live in compounds – walled areas with Saudi gatekeepers.  Life inside the compounds is freer than outside but the law is the law.  The compounds are of different sizes, and this is about a very large one with large buildings.  Once inside you could quietly find your way to Christian services for different denominations in different buildings, normally on Fridays, the Muslim weekend.  My experience was of the illegal, underground Anglican church.  How did it work?

Word of mouth. Attended by compound residents and others like me who travelled in from outside – many dozens.  Resident ordained priest; I think his visa gave his job as Teacher.  The building was, I seem to remember, a gym.  Full accoutrements, all brought out on the day: altar, candles, crucifix etc.  Hymn books, prayer books, order of service sheets.  Electric organ and piano.  Choir, including yours truly.  Vestments for all: choir, priest, acolytes.  Choir practices on other days.  Wide range of music, settings, canticles, responses, anthems.  Wafers and wine – yes, wine: see the blog of 13 May.

We’d buy music scores during our leaves, bring them into SA, and then shamelessly photocopy them.  Our church was in the diocese of Cyprus and the Gulf.  Occasionally we’d get the Bishop in from Cyprus, also under a ‘Teacher’ visa.  He told me that his crook was collapsible (luggage and customs-friendly) but he had to borrow the mitre from the Catholics.  I took lessons, became a Lay Reader, and am the proud owner an official Diocesan Certificate to that effect.  And I could dispense wafers and wine, but not consecrate of course.

Social life: excellent as an escape.  Day-to-day my work with the RSAF was stimulating though stressful at times, and social life in my compound was varied and enjoyable (stories about that another time perhaps); but it was very refreshing to get away (about 20 minutes drive) especially because in the big compound – not a BAe one – I had no special position.  Very relaxing, much fun, and great friendships were made there which endure to this day.  It was there that I met the Revd Bernard for example, with his moral and religious dilemma about how his life was saved: blog of April 20.

So it was all illegal, but was it dangerous?  It could have been.  We had to be careful.  Once inside that compound I think we felt pretty safe, but we were always aware of potential problems.  Legally, men and women were not allowed to sit with each other in a public place – which congregations and choirs ignored.  Driving back after communion, or more seriously after a party, was risky: the legal limit of alcohol in the blood was zero.  During my eleven years there I worked out that I did that journey over 800 times, many after merry-making. The Catholics were more vulnerable: there were more of them, the congregations swelled by large numbers of Filipino workers and others from catholic countries.  And then the problem of cars: why would so many expatriates’ cars be parked at a particular time so regularly?  I was told that the Catholics were raided occasionally, though what the penalties were I can’t remember.  During my time the Anglicans got away with it though not, I suspect, as a result of divine intervention.

So that sums it up, more or less in sketch mode.  A remarkable experience over quite a long period.

A thought though, and this touches on something from my rather laboured points yesterday.  The company that owned or rented the large compound knew what was happening, of that there was no doubt.  I believe Saudi authorities knew also, as probably did the guards on the gates who stopped us each time – a simple “Going to see friends” generally got us in, in suspiciously large numbers.  What was happening I think, was that a deliberate blind eye was being turned.  SA needed expats, lots of them; and it recognised that life for us was very difficult there; and it knew our ways; and it took the view that within reason it would allow us to live the way we wanted to live inside the compound walls.  Anyone who publicly transgressed outside could be in serious trouble.  Or if a Saudi complained or made accusations against us the authorities might be forced to take action.  But the blind eye approach was adopted, I think, and it was in no one’s interest for our transgressions to be made public

Which leads me to suggest that such covert favouritism by the powers-that-be, such deliberate waiving of scrutiny and surveillance, are more easily done in a totalitarian state.  In liberal democracies the more-or-less free media would pick up on it, denounce it as unfair preferential treatment – and to foreigners of all people! – and no democratically-elected politician would be able to defend such a position.  So in one sense we owed our regular Christian law-breaking to the autocratic Muslim rulers who made the law in the first place.