Gremlins …Soft and Bite-Sized …and a police cell 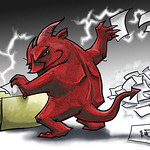 Apologies: If anyone read the long attachment yesterday they’ll have seen that a couple of links inside it didn’t work. There were gremlins in the system – something to do with Microsoft and Apple still not co-ordinating well.  It’s  now sorted.

As it said though, my food at the moment has to be ‘Soft And Bite-Sized’, Level 6 in the framework of the  … wait for it ….  International Dysphagia Diet Standardisation Initiative.  The links again: IDDS and my deliverer.

Soft And Bite-Sized?  That’s not a bad target for a daily blog!  I’d intended to spend no more than an hour each day, but frankly it has often taken more than that.  Some of the longer ones were probably necessary for one-off scene-setting – why I was in the Sudan and Libya for example, or in order to introduce the illness – and there might be a few in future that need that sort of background also, but once they’re done, they’re done.

In that spirit, and as I was thinking again of Nazanin Zaghari-Ratcliffe and the awfulness of being imprisoned in certain countries, this little SAB-S story of my own plight came to mind:

It was Libya, summer 1975. For some reason I’d been called out of the desert and was in Tripoli for a couple of days; and I ended up being arrested and put in a police cell. No phones, no contacts and as far as I was aware no rights to lawyers or access to a consul or anything like that.  Isolated, completely helpless, and very worrying.

In the middle of the afternoon a policeman had seen me staggering along a road, weaving through the traffic and clearly drunk – in a country where alcohol was strictly forbidden. Taken to the cell despite protestations I was left there. No idea what would happen next.  I knew I wasn’t drunk – after all I wasn’t in the desert! –  but I was definitely not well. The future wasn’t looking good.  Eventually after about three hours I think, through my limited Arabic and another policeman’s limited English they agreed to call a doctor.  He arrived, checked me, and said it was quite simple.

The balancing mechanism in my ears wasn’t working.  It was labyrinthitis probably caused, he said, by dust or sand from the desert, always in the air throughout the city.  My oil company was called and I ended up in a rather nice private clinic for three days.  The feeling was terrible – even in a darkroom in the middle of the night I was seasick – but it passed.  It lingers to this day but only in certain situations: I can walk up mountain roads without difficulty, but a ladder is beyond me – swaying and sickness.  Annoying but manageable.

So I was lucky.  To experience being locked up, to feel totally helpless, with no knowledge at all of how long it might last, and with no easy means of getting support or representation, was and is harrowing.  I didn’t know then that it would last for about only three hours. Pity those trapped by systems and processes that don’t protect them and who are incarcerated for long periods and perhaps years through no fault of their own.  A truly terrible fate.