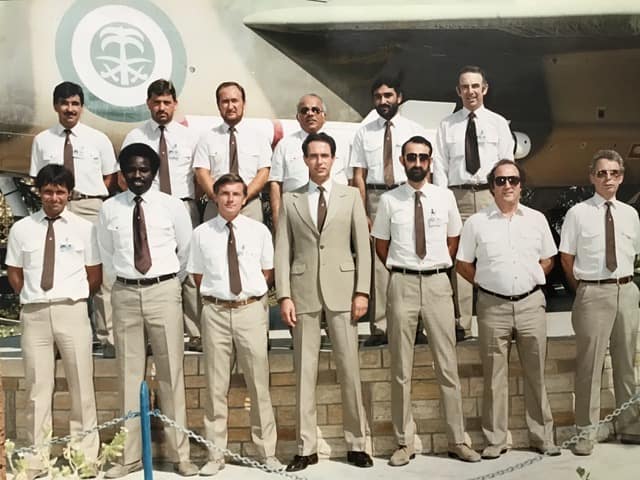 It has been suggested that this is the time – the economic crisis resulting from the pandemic –  for British trade unions to work closely with the Conservative Government for the good of the country.  The unions and the Tories are not natural allies.  We’ll see.

Well, that’s another springboard for some jottings: the time when I was Head of Reprographics for the Royal Saudi Air Force (RSAF) training project.  It was the mid-1980s, at exactly the time of the major confrontation between the print unions and Margaret Thatcher’s government.  Many will remember Rupert Murdoch and Wapping.  How is all this connected?

In the blog ‘Reporting lines’ on 26 May I described how the Commandant of the Institute moved me across from BAe to report directly to him.  I was then in charge of the project to rewrite the whole of the RSAF training profile: English Language, Maths/Science, Aeronautics, Electronics, Air Traffic Control et al, which was done through the heads of those departments.  Time was tight.  The project was approved by RSAF HQ and started in March 1984.  Not only did we have to do a huge rewrite, but the training materials had to be printed and ready to be used progressively, course by course, from January 1985.  The institute had a printing facility but I was told that this was the most major demand it had ever faced.  The Commandant decided that I should run it in addition to running the course development project.  I was therefore Chief Project Co-ordinator and Head of Reprographics.

What was the size of the reprographics operation?  The report I wrote at the end showed:

But again – what’s this to do with British trade unions?  The answer is that the reprographics workers were mostly from Britain, recruited like all of us by BAe.  Most had been members of our unions; and the boss of the team at the start of the project was a rabid union man.   He prided himself on defending ‘workers rights’ and often spoke of ‘chapters’ – the term for branches of the UK printing union.  He was also a very big man, strong, a bully and prone to anger. They were all experts in their trade.  I was not.  Technically I was their boss for the project.  But to him I was just a jumped-up young (well, latter 30s) upstart.

So one day he threatened to hit me.  I’d told him that his team had to get something done by a certain time.  He said it wasn’t possible.  I said it was.  He knew his team didn’t like him but he didn’t know that they confided in me – so I knew it could be done.  He said they’d have to work beyond their contractual hours.  I said, so be it.  He talked about ‘rights’.  I reminded him that in Saudi Arabia ‘rights’ was a difficult concept.  He said he’d report me to the Commandant.  I said ‘Go ahead’.  He knew he’d lose, so he decided to lose his self-control instead; clenched his fist; told me what he intended to do to me; and almost did it.  Whether that was connected I don’t know, but a month later he resigned.

The others were hard-working, more aware of the realities than their boss, and well-meaning.  We got on well, and Tony the new team leader was a delight: a good drinking companion.

Watching these men work was fascinating.  The Heidelberg presses were large, taller than any of us; the stitcher-binders were noisy; the other machines fitted into the process; the guillotine kept breaking done so we ordered another but it took 18 months to arrive.  But they did it; they got everything printed in time.  They were proud of their work, and it looked good.

I returned to Britain in 1987 once the new profile had been developed, printed and introduced into the classrooms.  No regrets at all about the years as Head of Reprographics.  I admired the printers  – see the pic of us at top with Tony on my right.  I’d learned much about how they operated.   It was a sector and a trade culture that I’d not experienced before, and haven’t since.  The unions lost the battle with the Thatcher government.  Their practices, culture and the technology have changed greatly in the last 35 years, and with direct journalist input and so much web-based production many of the individual practices that those men excelled in will have disappeared.  Progress, I guess.  Anyway, no regrets.  It was a good experience.   And I hadn’t been punched.