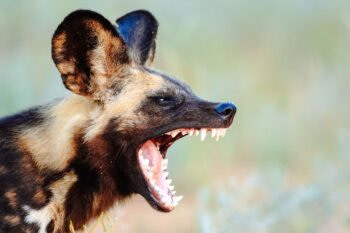 Yesterday’s news included reports of bio-detection dogs being trained to sniff out the virus in humans, their sensitivity to odours being equivalent to “tasting one teaspoon of sugar in two Olympic swimming pools”.  Following on from yesterday’s blog it was dogs, and the way that dogs sense and read humans, that gave me another lesson in self-management.

My school in Sennar, Blue Nile Province, Sudan, was about a mile from the souk, the area with shops (often shacks), the market, a lorry area and some houses.  Evenings were spent mostly alone in the school, which was never difficult so long as I had work to do – lesson preparation, production of exam notes – or if I wanted to sit and read and perhaps watch the rats (I just had to add that!); but it was also good to go into the souk and buy a Pepsi (fake) and a sandwich (difficult to describe so I won’t) and sit down with a glass of tea, or perhaps even buy a beer to take back.

If I’m honest it was also nice to be seen there because, as the only westerner for most of the two years there, I was recognised and often greeted and ‘salaamed’ by the Sudanese, who would appreciate and encourage and often roll with friendly laughter at my attempts to speak Arabic. Two more bits of colour: little children would run after me and hold my hand excitedly shouting “Khawaja!  Khawaja!” – in one sense “foreigner” but in a warm, honouring and respectful way like “xenos” (“stranger”, “guest”, friend”) in classical Greek.  And the locals loved the fact that my name could be translated: Dawood Abdulsalaam, David Servant of Peace.  So going ‘downtown’ was a pleasant relief and I would do it a few times a week, alone.

The mile walk was across empty terrain of sand, earth, and in the rainy season mud, and there were a few clumps of trees (we were close to the river).  No electricity between school and souk but I knew the way, relying on moon and torch; and it would take about 15 minutes.

I discovered early on however, that there was at least one pack of feral dogs.  They were not friendly to humans.  Like the rats, and I suppose all wild animals, they were always hunting for food.  I had no idea whether human flesh was their thing, but I did know that they were menacing, and deliberately so.  And there was rabies.

The first time I did the walk alone, in the dark and unsuspecting, there they were, their low growls close by, following me.  More unsettling, they worked in formation.  I never knew how many, but some stayed parallel to me on both sides, left and right; and the others were a short distance behind me, again to the left and right.  Square formation, and they kept to it.  It’s not melodramatic to say that I was surrounded, and that’s what they intended. Perhaps there were only four, but I never knew.  I simply heard them; and they kept pace with me; and it was menacing.  That first time was, I admit, very frightening: it was unexpected and I couldn’t evaluate the threat.  No matter how insensitive a human can be however, we know when a certain type of growl speaks “Danger”.  Anyway I made it – the pack wouldn’t come near the lights of the souk.  In the souk I bought a second torch and a knife (silly idea perhaps, but that’s all I could think of), and I made it back.  I was rattled – how to manage it in future?

The only answer was to bite the bullet and do it, but I’d learned a few things from the first walk.  Startled to hear them, I’d swung the torch round to try to find them.  They didn’t like that – the growls became wild barking.  Then I’d quickened my pace and had broken into a run.  They liked that – barking madly, running with me and, it seemed to me, closing in.  So I’d slowed down again.  What to make of this?

A lifelong regret is that I’ve never owned a dog.  I love them – domesticated ones – and I’ve played with many.  Even in 1970 I knew how human body language, movement and attitude can be sensed by canines, affecting their own behaviour.  So I felt I had to show these wild ones that I was very confident, patently unworried by their presence, not concerned at all, but firmly determined to pace my way to the souk and back.  I also practiced my own version of growling – silly idea perhaps, but I was only 22.  Of course it was worrying, and locals confirmed what I myself sensed: if the dogs smelled real fear there could be trouble.  And everyone was afraid of rabies.

This was therefore the self-learning: I had to project myself as a human with a purpose, not changing pace, not appearing to panic, not bothered by the growling or barking, not trying to locate them and, importantly, not allowing them to smell fear.  I guess it’s called ‘steeling yourself’.  Taking a deep breath – truly – I’d set off at a positive, unchanging pace, striding purposefully, torch shining ahead only, deliberately trying to ignore them, and forcing the mind to think of other things, which I felt might reduce the ‘sweat factor’.  It needed confidence – self-induced deliberately, and in a way artificially.  Going through the trees was the most difficult: I felt that they felt I was more vulnerable there.  And I growled a few times – a mistake: it set them off in even more manic barking!

Well, the result was that although the dogs were often there, they never did close in or attack.  The locals were aware of the danger, which is why they generally walked in pairs or more, but the school-souk-school evening walk was often mine alone.  It worked out.

I am convinced that those three human attributes – body language, movement, attitude – affected the dogs.  I’m also pretty sure that, after that experience, they helped me through the ups and downs of the following half-century. The ability to induce inner, and then project outer, self-confidence might, to a psychologist, sound suspect; but I suspect they would simply call it by different names.

This little story, and the one about rats yesterday, lodged in the memory bank because of  (a) the initial fear, (b) the more or less ad hoc methods that the young man used to control himself and to confront the fear, and (c) the benefit of learning those skills and then applying them throughout the rest of his life.  And as I said yesterday, we’ve probably all had experiences where we needed to ‘get a grip’ and ‘take a deep breath’ and Keep Calm and Carry On.  I don’t think it’s bravery; but it is definitely learning about oneself, learning about fear, and developing a greater capacity to deal with it.  I might be benefiting from some of that right now.

End of Bedroom Lessons and Walking Lessons.  Addition of some colour of Sudan life.  No idea what to do tomorrow.  Time for a glass of something pleasant – without thickening powder.