Zoom with a View 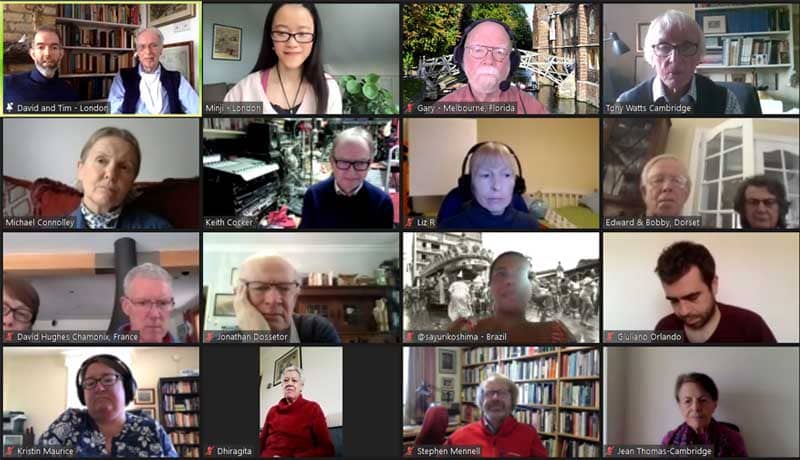 I wrote to some colleagues yesterday afternoon, thanking them for their help and saying, “Wish I could have a pint to celebrate!”

Yes, the “Explore Culture” Zoom discussion was over. Scheduled to last an hour, we had to stop it after 75 minutes. Joining us were over fifty attendees from the UK, Ireland, the Netherlands, France, Singapore, Brazil, USA, Guatemala, Panama, Japan, China and possibly more. I had the impression that some would have liked us to continue longer. If that’s so, regrets but probably it’s better for people to leave wanting more, rather than wishing we’d finished sooner.

It was a challenge in many ways. The themes were a challenge, covering a number of topics: MND, how I’m dealing with it, the blog, MNDA and research, accompanied or assisted suicide, fundraising. The technology was a challenge, moving from speaker to speaker to questions and answers, to me trying to look pretty and failing while listening to my own e-voice and the rolling script. Synchronising everything was a challenge. I’m used to public speaking but on this occasion, even though my pearls had been pre-recorded, the nerves were quite challenged. But it went well.

Let me publicly thank Minji and Tony and Lesley and Brian and Tim. A truly great effort. We pray that it will bear fruit – more interest and understanding for this awful illness, and more funds to help research.

Minji has a neat format for these talks. She asked me for music to play at the beginning and at the end. After some thought I chose part of a cheerful Torelli Trumpet Concerto to start the programme, and at the end the incomparable Louis Armstrong singing “What a Wonderful World”, which got me quite emotional though the eyes stayed dry … just.

As planned, Minji also recorded it. For copyright reasons she had to cut out the music, so the talk starts rather abruptly. It’s below, and can also be accessed any time by hovering over the ‘Media’ tab in the navigation bar at the top, then selecting ‘Zoom Talk’.