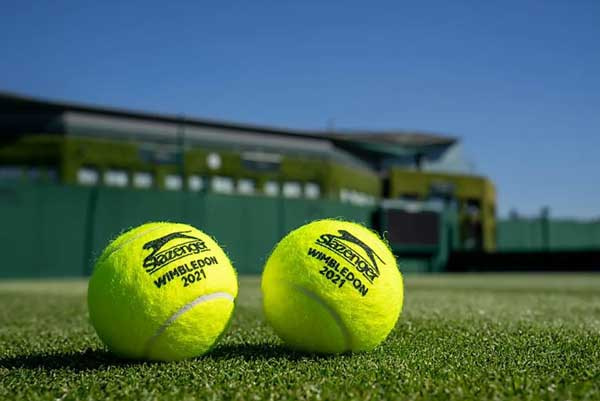 Yesterday afternoon.  Wimbledon.  Men’s semifinals.  Six hours of pleasure in front of the TV.  Later today, Ladies’ Finals.  Much pleasure this afternoon, for sure.

Ah, the memories.  For years I entered the ballot for a couple of tickets to Centre Court and No 1  Court, and I was pretty lucky.  Ten times over twelve years the random draw gave me two tickets.  They were not cheap but naturally I accepted them, and invited different friends to join me.  Who wouldn’t?  So there I’d be, year after year in one of the courts, with friend, watching the best in the world.  Marvellous.

After the first time, a pattern, a ritual.  In the late morning we’d walk ten minutes to a particular bus stop on Park Lane.  With pre-booked tickets we’d board the special Wimbledon bus to trundle gently south, over the Thames and into the Ground itself.  Super service.

Some guilty (not really) pleasures: often it would be an open-top bus, so we would sit on top, the trees almost brushing us, and we’d smile and wave in a mock-superior way to the long lines of people trekking the mile from Southfields, the nearest tube station; and then the same to the queues outside the Ground itself.

Once inside, direct to the Pergola Café to find a table on the lawn.  Then the expensive, high quality buffet lunch and very expensive medium quality bubbly.  After that, a wander round the outside courts where you could often see the great beasts warming up.  And then to our Centre Court or Number 1 Court seats for hours of gripping tennis, with occasional breaks for Pimm’s – and why not?!

The matches were always good but other memories, anecdotal, spring to mind.

The officials welcoming us into the court were often in military uniform.  Speaking to one, I was impressed to learn that a short time earlier he’d been fighting in Iraq.  He said that, like his comrades, he had volunteered to help in Wimbledon.  After the traumas and stress in the Middle East he hoped it would help to balance him and restore his feeling of normality.  Wimbledon is anything but normal but we knew what he meant.  Great guy.

Then, the year I had tickets to Centre Court for the Men’s Final.  Huge excitement.  Invited a great friend who’d never been there.  I built up the drama but on the bus, a dreadful experience; re-read the tickets; they were for Number 1 Court.  So we would miss the Final, and I couldn’t watch it on TV.  Devastated.  Friend completely relaxed. During the whole afternoon I left our court every half an hour to go up Henman Hill (Aorangi Terrace) to catch up on the big open-air screen.  Upsetting.  Pretty silly also.

And then there was the Men’s Final in 2002.  That time friend Jane had got the tickets and had invited me.  Amazingly we were on the front row, at grass level, almost centre, near the net, opposite the umpire and the players’ seats.  Perfect views.  The players, Lleyton Hewitt and David Nalbandian.  Quite a good match, but memorable for more than the tennis.

It rained.  Play stopped.  The players walked off.  We waited.  Rain stopped.  We waited.  Players returned with their kit bags and started unpacking.  But someone else arrived also.  Suddenly on Centre Court there was a streaker.  Completely naked, arms high in triumph, a rather tall man bounded down the audience steps, jumped over the low fence and onto the grass, danced around the court, did some somersaults and then a moonwalk.  Laughter everywhere, even in the Royal Box.  A minute later two rather short men in

suits ran onto the grass with blankets – you know why.  Our entertainer stood still, near the net.  They ran towards him.  He jumped over the net.  They couldn’t do that so they ran round to the other side, at which point he  vaulted back again.  Huge laughter and  applause.  Then a woman arrived with a blanket and he let her take him away.  That’s not the sort of thing you forget.

Wimbledon has served me well and still does; and I hope for many of you also.  This afternoon the Ladies’ Final, and tomorrow the Men’s.  Great fun.

Time: 09.00.  Moving on hastily from whiskers, here’s the latest about the BBC broadcast where I might have a part.  It’s scheduled for tomorrow, 3 August, but could be postponed if last minute news...

END_OF_DOCUMENT_TOKEN_TO_BE_REPLACED

Well that was a surprise! Four days ago I wrote about the difficulty of living with an increasingly paralysed left arm and hand. To demonstrate, there were a few mildly humorous suggestions.  One...

END_OF_DOCUMENT_TOKEN_TO_BE_REPLACED

I’ve been quiet for a few days. They’ve been rather difficult health-wise. In one sense it’s ‘more of the same’.  Each weakness that I described in the last State of Play document has worsened. ...