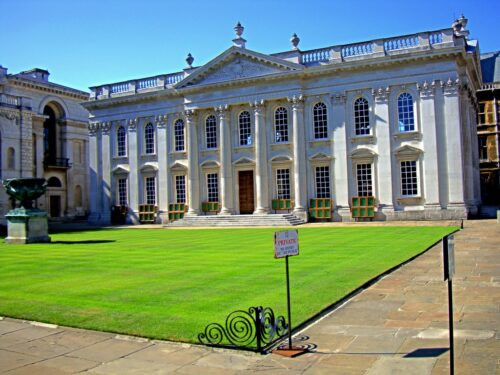 An intriguing news report yesterday: the number of Oxford and Cambridge admissions from state schools has not risen in 20 years. The proportion of state school pupils has risen in relation to private school pupils, but in terms of actual numbers both groups have fallen.  It’s due to the increase in students from overseas.  They pay at least twice as much in fees.

A few reminiscences.  I’ve been asked to do this before but there’s such a kaleidoscope of memories, and this is only a blog, that I felt I couldn’t do it justice.  Let’s hang it on the news report then.

In 1966 I was a state school entrant.  A careful look at the matriculation photo, and raiding the memory bank, seem to suggest that around 120 of the 125 young men – then only men in St Catharine’s – were from the UK.  I’ve no idea how many of us were from state or private schools.  I came from what is now described as a ‘disadvantaged background’: my father was a factory labourer who left school when he was 14, and my mother a shop assistant, having left school at 11.  Both were from Smethwick in the industrial Midlands.  For much of their lives there were no reserves of cash: they lived from week to week on their wages.  If either of them lost their job they had to tighten their belts, literally, and eat less.  It was a tense, insecure and worrying life.

This isn’t a hard luck story though.  They got through it, moving from social housing to renting above a shop to finally buying a small house; and in my teens they had a car.  In fact there was some very surprising good luck, for me at least; and ultimately that meant for them.

My state grammar school, founded just seven years before I joined aged 11, was a good one.  The headmaster was a classicist, so naturally it had to be!  Somehow the teaching staff identified four boys who they believed could jump a year, from the 4th form to the 6th (old terminology) and then take ‘A’ level exams a year early.  I was one, instructed against my will to study Latin, Greek and Ancient History and then to apply to Cambridge; and it worked.

The college was and is small in size.  I think the number of undergraduates is more or less the same now as then, around 400.  When you’re in your late teens, and part of a small community, and living communally, and eating together, and playing sport together, and enjoying college clubs and societies together, and praying together (most colleges had chapel and chaplain), and studying together (there were 10 classicists in my year) you do tend to bond.  What’s more, if the college gates are locked at 10pm every night and if you’re told, as we were, that you had to be inside or you’d be fined; and that if you were found with a woman you might have to say farewell to college and university, then college life becomes rather focused.  In a small college it’s very focused.  It didn’t mean that we obeyed the rules though.

We stay in contact and we still meet.  We each have different memories and experiences.  My own are my own; they’re not necessarily true of others. Any observations are specific to me; they shouldn’t be seen as defining the university or the college – they’re just an individual perspective.  I’ll trot through some.

The BA course lasted three years. The first year we lived in rented accommodation in town; and the other two in college.  The famous one-to-one supervisions could be unnerving, for me at least: Classics was interesting but I didn’t find it deeply absorbing, so it could be a struggle.  In Cambridge each student has a Tutor, who doesn’t teach you: the Tutor is normally an academic in another subject, and the role is as a sort of personal guardian, ‘in loco parentis’.  Mine was a St Catharine’s geographer rejoicing in the splendid name of Augustus Caesar.  Not many classicists have that privilege.

For me and for some fellow classicists there were disappointments.  The Classics Director of Studies left during our second year and was replaced by a succession of individuals including one, a judge in London, who required us to post our essays to him.  Then, awfully, as two of us were entering an examination room for Finals, a man who we’d never met said to us, “Who are you?”.   That was upsetting.  It transpired that for the whole of our final year we had not been given any supervisions in our specialty, Roman Britain.  We’d gone into the exams just having read a book, and that was it.  No tuition.  Blind.  Shocking.  Augustus Caesar assured us there wouldn’t be a problem, and nothing more was heard about it.  These days there would be a problem – a public problem – and a lot would be heard about it.  I stress that this was specific to fifty years ago. It couldn’t happen now, one presumes. But we still talk about it.

Going back to the news item, I don’t remember sensing any upper/lower class feeling, or private/state school distinctions.  Probably we knew broadly about each other’s backgrounds but it didn’t seem to make a difference.  And I think that was helped by the fact that we did all live in similar rooms, and ate the same food, and wore the same college blazers and ties and so on.  And we all had to be in jacket and tie for dinner.  And all wore college gowns for seminars and dinners and exams. There was little opportunity for showing off, at least in my memory.

How could I afford this?  Very many of us of that vintage regret that state grants are no more.  My parents said that one of the most frightening and humiliating experiences they ever had was in early 1966, six months before I went up to Cambridge.  They were interviewed in depth about their wages, their savings (virtually zero at the time) and their prospects (ditto).  The result however was that I was given a 100% state grant.  That grant was sufficient to cover college fees – tuition, accommodation, food, club and society memberships – and a little more.  I survived on that for three years though I had to top it up by working for a few weeks in the long summer vacations, which also funded two great holidays to Greece and Turkey.  In money terms I left Cambridge in 1969 much as I had joined it in 1966: almost nothing in the bank.  But I was not in debt.

I don’t know the numbers but there must have been very many like me.  We’d journeyed from socially disadvantaged backgrounds to mixing freely and by and large equally in communities that straddled the social classes.  It transformed us all.  How lucky was that?  And how tragic for teenagers these days.  Today my parents would stop me going to university; it would be unthinkable to end up with debts of around £30,000.

A school girlfriend – still an influence in my life, aren’t you dear? – tells me that my parents never really understood me from Cambridge onwards.  Yes.  I’d moved outside their very narrow world; my voice had changed; my way of thinking and way of expressing myself had changed; my horizons were vast – from a home with no books to a world class university, to remote Africa, to the Sahara, to the Gulf and so on.  We were always close though.  I was an only child; we needed each other; we adapted; I looked after them to the end.

The news again: it seems that the proportion of UK students from both private and state schools admitted to Oxbridge has dropped by 10% in the last 10 years.  Those from abroad, paying much more, have taken a higher percentage of places.  How come?  It looks like there will have to be yet more scrutiny of the admission procedures,  In a way one can understand it however: it could be that more and more UK students and their parents, particularly those from disadvantaged backgrounds, just can’t afford the fees. A great pity.  But what if overseas students stay away now because of the pandemic?  And what if relations with China, which supplies so many student here, decline further?  It might mean that more places  become available for the poorer Brits; but Oxbridge and all universities say they need more money.  More problems ahead.

This has covered about 2% of what I’d like to say about those formative three years in the 1960s.  College friends reading it will probably be shouting, “But why haven’t you mentioned this! And why not that!  It’s obvious!”. They’re right but, as with yesterday’s blog about the barristers, this is enough and I’ve had enough.

A final note today: I left Cambridge and St Catharine’s in the summer of 1969 and in the following 30 years I went back twice, I think.  There was no need; it was over; friendships endured and were more important than buildings; and there was a bigger and more mature world outside school.  Then by chance in 2000 something re-engaged me with the university and it still does; and five years later by chance something re-engaged me with St Catharine’s and it still does.  All pure chance.  It’s a strange world and a strange life.