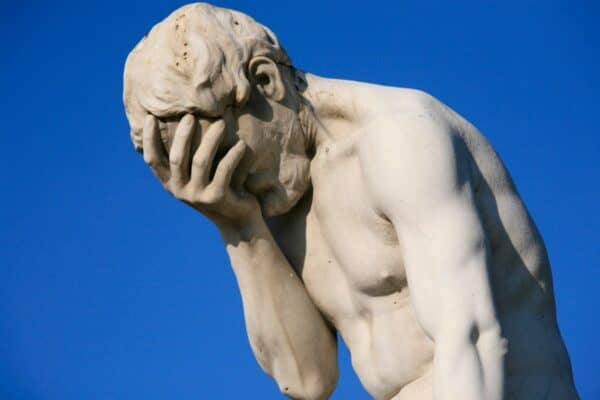 The other day I read about a conversation between a novelist and a historian.  They were disagreeing about a health problem.  Suddenly a breakthrough, with deep embarrassment and laughter when they realised that one had consistently misheard the other.  The topic was, how shall I say, rather risqué, so it won’t appear here.  It did set me thinking though ….

We’ve all been in such situations.  Casting my mind back I’ve recalled three so far, but there must be more.  When they surface in the DP memory bank I’ll publish them, if they’re decent.   Here are my three:

Age 13 or 14.  A case of mis-hearing a word.   At school, in a class of about 30 boys, the History master was introducing us to the Reformation and the critical part played by Martin Luther who nailed ninety five theses to the door of a church.  That’s disgusting, I thought, and anyway how could he do it?  So I asked the teacher.  “What do you mean” he replied.  Blushing, young DP wanted to know how it was possible to nail even one faeces, let alone ninety five.  Oh the laughter!  Oh the mockery!  Oh the embarrassment!  Never forgotten.

Age 24.  This was the little oil camp with just seven or eight westerners, mostly American, described in various blogs from April 9 to May 3 last year.  We lived in two-man trailers, each man having a small room with bed, cupboard, desk and chair; and a shared bathroom in between.  One evening my Texan neighbour Roy and I were packing.  Mad Bruno would be skidding in early the next morning in his light aircraft to get us to Tripoli airport, the end of our 42 day session, with 21 days leave ahead before returning for the same again.  “Darn it!” said Roy – actually that wasn’t the word he used: I have to protect my more delicate readers.  “My alarm clock’s stopped working!”.  “Worry not Roy”, said I warmly.  “I’ll knock you up in the morning”.  Do I need to explain why a Texan oil man in his 60’s might not take that as the generous gesture I intended?

And about twenty years ago, in London.  An old college friend was visiting with his wife and an American couple, all of them leaders in their local churches.  They’d booked a good, rather stylish restaurant so we settled in and started studying the menu, which was quite imposing, as was the waiter.  A very superior waiter.  Going round the table, we chose starters and then moved on to the main course.  My companions ordered meat or fish, and prompted by the waiter added ‘well done’,  ‘medium’, ‘medium rare’, ‘rare’, ‘off the bone’ and so on.  My turn.  I decided on something I’d never eaten before so, wanting to sound confident, I put on a confident voice.  “Steak Tartare”, “And medium please”.  Silence.  Slight, polite smiles on the faces of my companions.  What’s up? I wondered, perspiring somewhat.  The waiter, polite and enjoying his superiority, explained.  Do I need to explain here?  No. Let me relive the embarrassment and cringe alone!

I can’t bring any more to mind at the moment. Thankfully.