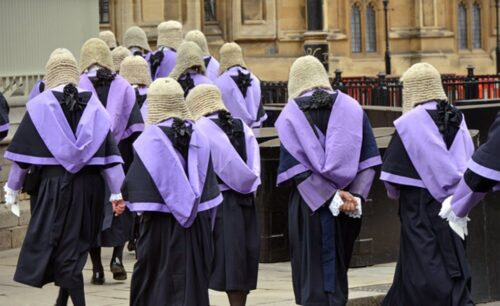 “We know how to do the law but we haven’t a xxxx clue how to manage ourselves”, she said. “That’s your job”.

With those words the feisty QC, Head of Chambers, opened a door and showed me into my new office.  It was a disturbing sight.  Files everywhere: shelves full of files, desk covered in files, piles of files on the floor.  This is going to be a real challenge, I thought.

I knew nothing about how barristers operated.  I knew some socially but fortunately I’d never needed any legal services – all those little disagreements with the law had happened abroad.  About to leave her chambers in Middle Temple, one of m’learned friends – in fact we’d been in the Sudan together 30+ years earlier – had asked if I’d be interested in managing it: there was a vacancy.  Sounds interesting, I thought.  This was in the early 2000s when I was in freelance consultancy mode.  A couple of interviews later – very careful interviews by very cautious lawyers – and it was agreed.  So, a new chapter and a steep learning curve for me.  Someone has asked me to describe it.

There’s so much to say about the time in Middle Temple; so much to explain about the environment, the culture, the systems and processes and personalities.  It would take many many pages, but this is a blog so I’ll try to canter through it in sketch mode.  Also, explaining every reference would take too long, so google if you want.

A very attractive location: close to Middle Temple Gardens and the Elizabethan Middle Temple Hall (first recorded performance of Twelfth Night and much else).  Historically clients could engage barristers’ services only via the chambers’ clerks, run by the Senior Clerk who therefore exercised great influence, largely controlling access and fees.  Dynamic tension between barristers and Senior Clerk (and clerks); and more complexity added by Manager/Chief Executive such as me.  Who was managing whom?  Job descriptions were often vague, so areas of responsibility could overlap. I couldn’t get involved in legal matters yet I was responsible for ‘keeping the chambers running’, whatever that meant.

What was ‘Chambers’?  An old building housing about 60 barristers, some sharing rooms, about 6 clerks, Senior Clerk, some pupil barristers, and one or two others including me.  Three minutes’ walk from the Royal Courts of Justice.  Clerks hurrying to and fro with trolley-loads of files.  My office had a safe; I didn’t have a key to it; it contained videos, pictures and other documents showing awful things.  The main focus of the group was family law.  There were extremely distressing cases although they were rarely discussed in my presence.  I knew a little though, and I often wondered how the barristers were able to defend or prosecute some of the parents.  Given the traumas, the suffering of the parties and especially the suffering of the children, I found it difficult to understand how they could act for someone they detested; but ‘professionalism’ was the keyword.  Occasionally a barrister would agonise: divorced parents so determined to have custody of a child for Christmas that they’d spend thousands of pounds fighting each other, right up to Christmas Eve – and that was a minor example.

Compared with other chambers mine had a relatively informal culture.  Established by two women, both then QCs and joint Heads of Chambers (one who threw the door open for me), that ‘set’ (another word for ‘chambers’) was unusual, I think, in that the majority of the barristers were women; and the custom was for the clerks to address us by our first names.  In other chambers they tended to say Mr, Mrs, Miss.  There was no mistake about status though.  We all knew who was a QC, and where the barristers were in terms of seniority.  In many ways it was like some Oxbridge colleges today: the longer you’re there the more senior you are.  For barristers it depends on ‘years of call’ – the years since they were called to the bar, unless they’d ‘taken silk’ and become a Queen’s Counsel, QC (an explanation for my overseas friends).  In Oxbridge colleges it’s more complex and it can be entertaining trying to avoid bruised egos.  They’re both small worlds with their own cultures, but the barristers’ system is clear and easy.

Everyone worked hard in my view.  Briefs (court papers) could be delivered to barristers at the last minute; they’d work late into the night; I’ve known them sleep on the floor in their rooms.  Occasionally two of our barristers would be on opposing sides.  Once I walked into a room to find two discussing the case, which they shouldn’t have been doing.  Naturally I hadn’t heard anything!

Apart from trying to keep this together without interfering in the legal activities, I was responsible for the fabric of the building; the room allocations (which could be contentious); the rats under the floor where the Fleet River flowed; Chambers Meetings and AGMs; insurance; barrister’s seminars for solicitors; compliance with the Bar Council’s quality standards; chambers’ finances; the question at one time whether to lease other premises; representing chambers to Middle Temple itself, and more.  I said it was a learning curve. There had been many such curves over the years but this was an especially steep one.

One potentially difficult relationship was with the Senior Clerk.  Traditionally that position had held much power.  Although he was an employee the SC filtered the clients through to his employers, the barristers, and so could influence their income.  Only in recent years had professional managers been brought in to do the sort of job that I was doing.  As it happened the SC in my chambers was charming but also determined to retain his traditional authority.  And I had to evaluate him – 360 degree assessment, getting opinions on him not only from the barristers but also from his own staff, the clerks.  It was a sensitive process and the results would influence his own income.  I couldn’t pull punches but we managed it; there was friction at times but it settled down.

It was a good social life: drinks in the evening occasionally; garden parties in Middle Temple Gardens; joining with other chambers for socials in The Royal Courts of Justice, one near Christmas when, to the stunned disbelief of the more junior barristers, the highest judges in the land – famous, feared and revered – took on the role of waiters, circulating with the drinks on trays.

The time came to move on.  It had been a full-time 18-month project.  Those files, strewn all over my office, had symbolised the difficulties there, and the need for order and restructuring.  I’d done what they wanted and now we had to recruit a permanent Chief Executive.  I was asked to stay on in that role.  Frankly I’d enjoyed it.  Although it had been hard work it was fascinating and sometimes dramatic and funny.  A barrister still on the floor under a table the morning after a party?  An alleged sexual liaison between barrister and staff member that broke the status sensitivities and required formal QC interviews with me as ‘recorder’?  Being kissed by Esther Rantzen, on the cheek of course?  The male barrister who cycled in each day, showered, and then used communal towels to dry off?  That last, by the way, finally got them to agree to pay for electric hand-dryers.  It will take too long to explain that!

I thought about it but said no.  It was enough.  We stayed in good contact though: they asked me to continue with the annual 360 degree assessments of the Senior Clerk and also of my successor.  On the whole they were very nice, very committed people, all of them.  I was grateful for the opportunity to do that work, to learn about the profession and how it operated, and to add it as another chapter.

Could have written a great deal more but wanted to plead ‘Not Guilty’ to the charge of fuelling boredom. Or Guilty, depending on how you see it.