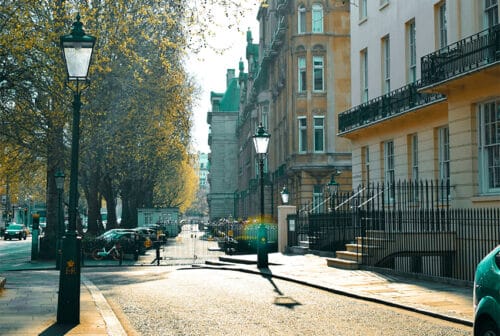 This won’t be so interesting: just a few things about how I’m spending my days at the moment.  I still wasn’t feeling so well yesterday. The temptation was to have breakfast and then do nothing. I knew it would probably make things worse so I forced myself to go for a walk, for the exercise.  It did help.

It wasn’t far.  Only about a mile and a half: a round trip to Marylebone High Street and back again through the side streets.  It was overcast and quite fresh, and when I get into rhythm it’s not difficult; in fact a few miles are fairly easy so long as the rhythm isn’t broken by having to speak.  It’s getting more tiring though, and the legs are a bit wobbly. I’m not sure if that’s because of the illness or because I don’t do it often enough.  Yesterday’s short walk was fine; on longer ones I do need to sit down for a few minutes from time to time.

In fact most days I try to get some sort of exercise, either walking outside or using the exercise bike inside.  The bike is now in another flat, originally rented out but which I’ve freed up for ‘other purposes’.  If things get really difficult I might move into that flat but it’s not necessary yet.

Some weeks ago a friend gave me five excellent home-made masks, each with three cloth layers, very well sewn, with wire in a sleeve over the nose area to give the closest fit, chin covered, and separate hepa filters of the right micron density to protect against incoming you-know-what.  Each filter to be used no more than once a week, and each mask to be washed after each use.  Very helpful, even though I dislike using them.

One of the interesting things about where I live is that during these restrictions it’s often easier to keep a distance from people by walking the streets around Marylebone rather than by going into the parks.  I live about five minutes’ walk from Hyde Park/Kensington Gardens and about ten minutes from Regent’s Park.  One can certainly find space in the parks but mainly by going off the paths and steering clear of the groups; but the streets are still remarkably quiet: there’s still little traffic, and we pedestrians do seem to move far away to avoid each other.  We walk down the middle of the road if necessary.  That was happening in Baker Street yesterday.

Does anyone really understand the UK, or should I say the England, regulations at the moment?  I‘ve had three official shielding letters because I’m “over 70 and with a serious underlying illness”.  They instruct me to stay inside until the end of June.  The physiotherapist however says I should get some exercise, especially for the lungs; and my MND consultant neurologist tells me, unofficially, to “keep taking those walks!”.   And who can I meet, and how?  My mask-maker friend visits occasionally, always masked and well-distanced; a neighbour and I occasionally have a chat, unmasked but well-distanced, sitting either inside our flats with the doors open or else in my roof garden.  On yesterday’s walk I would say that 10% of the pedestrians had masks.  Seeing a neighbour always suggests a chat.  We’re all very well-behaved in Marylebone, or so we like to think: some adopt the two-metre rule, mask-free; others cover up.  If you ask what’s right and wrong according to HMG there’s often a shoulder shrug.  Whatever we do we won’t get into trouble but I must say that there’s a distinct lack of clarity.  The government’s alibi is its official two-word injunction ‘Stay Alert’.  It’s certainly  necessary, little by little, to hand responsibility over to the individual citizen, but there’s also a need for clarity of advice and detail.

One of the more humorous aspects of my walks, although it has its sombre side, is if I have to speak.  Because of the illness, wearing a mask is a more of a trial for me than for most people.  Without the mask breathing can be laboured, saliva interferes, and speaking itself is more and more strained and guttural.  With the mask it’s a miracle if anyone can understand the weird, muffled, animal noises that emerge through the hepa filter.  Yesterday I called into a small supermarket to buy just one thing; then the self-payment machine malfunctioned (it couldn’t have been me, surely!), so I had to call an assistant.  She knew what to do, but when she heard my noises I’m pretty sure she suspected I’d had a few strong drinks.  On that occasion I hadn’t.

In fact I walk with the mask around my throat and then pull it up over nose and mouth if I’m near anyone or might have to speak.  That way I can breathe more easily for most of the time.

It’s not a lot of food compared with the past but each meal  takes such a long time to eat that I feel full at the end …. and then hungry a few hours later.  That’s probably why I’m still losing weight: a year ago I was 14 stone/89kg, now it’s 12.5 stone/80kg.  But is this troubling me?  Not so far.  I gaze proudly at the rowing photographs – David heaving away in the eights, at college in the late 1960’s.  They gave each man’s weight, and there I was: 11 stone 3 pounds, 11 stone 8, 11 stone 5.  Plenty of time to get back to optimum poundage.  Perhaps I should get a rowing machine.

In general then the daily round is breakfast, lunch and dinner – not so different from anyone else.  In between there’s not so much: some exercise if possible, emails, reading, the blog, occasional short phone calls, small-time shopping if needed, food deliveries, and coping with the illness. ‘Coping’ means (a) concentrating on everything I do, otherwise I drop or mislay things; (b) breathing exercises; (c) special effort to keep hydrated because swallowing is tricky and although liquids thickened with the special powder are easier to drink it’s still tempting not to bother, (d) checking on my judgment – could there be a bit of dementia creeping in, or sloppy thinking (more than normal?), and (e) not over-reacting if I sense something new, such as a shake or if I bump into something.  I don’t over-react: I’m ready for things to get worse, but ‘something new’ doesn’t have to indicate that.  Some weeks ago I stretched my arms out in front of me and saw clearly that both hands were trembling. The next day the same.  The next day it had stopped.  It hasn’t happened again.  That’s what I mean.

I was going to end on that note.  It wasn’t the most interesting of daily jottings I’m afraid.   Decided I couldn’t leave it at that though, so here is something far more stimulating.

An old college friend, retired after a career in a prestigious government organisation, recently asked a former colleague, “How do you calculate the changes in R, given a graph of new daily infections?”    A reminder: ‘R’ is the figure that is supposed to indicate the rate of infection transfer: more than 1 should mean it’s increasing, less than 1 that it’s reducing, and 1.0 I’m not sure, probably a plateau.