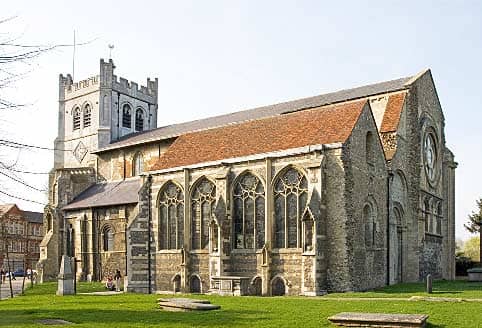 This could be heavy, or heady, stuff.

It was 1538 when the young Thomas Tallis arrived at the massive Abbey of the Holy Cross at Waltham, the wealthiest Augustinian House in England.  Apparently the abbey offered him excellent musical resources where no doubt he hoped his genius would thrive.  High potential!  Eighteen months later it had all gone.

It was the Dissolution of the Monasteries, ordered by Henry VIII.  Waltham was the last abbey in England to surrender to the King’s Commissioners. The clerics were pensioned off, the abbey’s treasures scattered, the huge estate laid waste, its income expropriated, and the abbey building itself mostly demolished.  Some artefacts were saved however, including a collection of music treatises now in the British Museum.  They’d been copied in the previous century and they bear the signature of Thomas Tallis himself, who was clearly influenced by them during his short time there.

Moving on a few centuries …

It was October 2013 when yours truly arrived at the magnificent ‘stump’ of Waltham Abbey, the nave of the huge original church, and saved by the people of the town after the destruction in 1540.  It’s a most atmospheric building.  But why was I there?

For the voice.  In a concert.  And not the singing voice.  DP’s speaking voice.  It was an evening of music that had survived the catastrophe: composers Tallis, Taverner, Browne, Tye, all of the period before or during the Dissolution.  And also new works by composer Stef Conner including the World Premier of ‘The Shrines of Waltham’ which, according to the programme, grew out of “fragments of the old, using a mixture of mediaeval prayer texts, musical fragments and her own setting of two poems – Wordworth’s ‘The dissolution of the monasteries’ and the anonymous sixteenth century ‘Lament for Our Lady’s shrine at Walsingham’.”  All performed by The Renaissance Singers, one of the finest amateur choirs in the country.   I remember it well: a full house, the pews packed, and the BBC in attendance recording it all and broadcasting it on Radio 3 some months later in 2014.

I remember it now, but I’d forgotten about it until the other day when I was rummaging around and found the programme and music.  Then my blogmaster maestro found the recording online.  And there was my voice, the real one.  Fascinating and for me a little moving.

What was I orating?  Hold your breath!  The programme again: “For ‘In quo corrigit / Circa regna tonat’ Stef has interwoven the surviving remnants of a work by Christopher Tye into her newly composed material through which Sir Thomas Wyatt’s poem ‘Innocentia Veritas Viat Fides Circumdederunt me inimici mei’ is declaimed by our guest narrator David Peace.”

So there you have it.  Easily understood.  No?  Well, fortunately my bit was done in English.

Given that I’m now voiceless this has some value to me.  As far as I’m aware it’s the only extant recording of the DP voice in good times, so I thought I’d mention it.  The piece is about 7 minutes long and my part isn’t that much, starting 3’55 into it.  It is what it is though, something of me that is now lost.  It’s here in full, with my copy of the score and embarrassing markings: