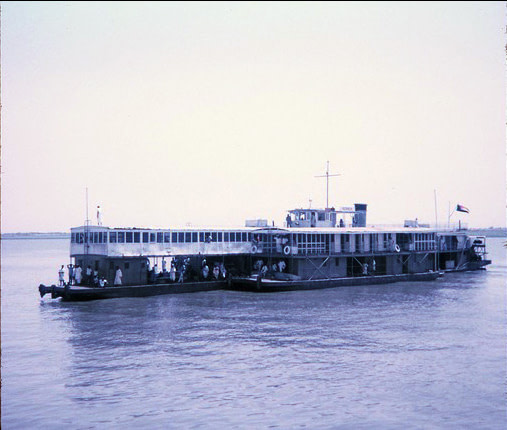 Without doubt It was the most surreal, remote, isolated, wilderness I have ever experienced – ten days on an old steamer in 1970, the White Nile journey that ended with our reception in Juba by the Sudanese army and the escorted visit to the cathedral (blog entry of 27 April).   A couple of friends have asked me to describe it.  It’s not easy.  For me those days left a kaleidoscope of memories and images that are difficult to put into words.

The British had left the Sudan in 1956 but the systems and infrastructure that they had established were still mainly in place.  Three old steamers were able to do the 10-day trip from Kosti south along the White Nile to Juba.  The journey south was about 1000 miles,1600 km.  Travel by land was not easy: there were no surfaced roads, the tracks were seasonal, sometimes impassable, and dangerous. The boat service was actually run by Sudan Railways.  My great friend Malcolm, the VSO teacher in Kosti, had sorted out our tickets.  We had read Classics together in college, had individually applied to VSO to work anywhere in the world, and were surprised and delighted that they had sent us to the same country and to parallel Nile townships.  Malcolm had his own memories and images of that journey and thankfully, unlike me, he kept a diary.  Very sadly he is no longer with us so I’m grateful to his wife Janet for providing his perspectives to add to mine.

We volunteers didn’t earn much but as government employees we did have some benefits so, remarkably, he and I each had our own cabin – small but, importantly, with toilets!  And there was a small dining room where three good meals a day were served, standards rarely experienced outside Khartoum other than on the trains.  This was first class. Other passengers slept on the lower decks and generally cooked their own food there also.  And there were sheep on board.

So it was 1000 slow miles, ten slow days, long periods of somehow navigating the massive, meandering White Nile from Kosti through seemingly endless, wild, ever-changing landscapes, stopping at the remote communities of Renk, Kaka, Malakal, Bor, and finally Juba.  The pace was gentle and seemingly silent, although nature was ever around us. There was almost nothing to do: this picture shows Malcolm on the first class deck outside his cabin. That was it.

So what did we see?  Hippos and monkeys en route to Kaka where we stopped partly for grass to be cut and brought on board for the sheep.  Locals were now in red cloth and decorated with African beads, so had the Muslim north been left behind?  Onwards to Malakal, men very much in red but also a mosque, and crocodiles.  More and more crocodiles as the days went by.  Malcolm recorded a story that one of them, with a snake, actually made their way onboard on an earlier journey. Then two days of nothing, or at least no sign of human habitation. The river was massive and at times impossible to distinguish because of the vegetation. We were in the sudd, the huge swampland that had prevented exploration further south for more than a thousand years: Nero’s troops had given up in AD 61.

Herons,  mosquitos, torrential rain, lightening, more hippos, a navigation problem that moved us into a tributary and then took some time to get back to the main Nile.  At Bor, the Dinka tribesmen and women, baboons, elephants, gazelles.  There was jungle.  There was the long grass – and it was very long: reeds, papyrus that Malcolm records as 15 feet.  I remember it as high as the top of the steamer.  And that leads me to a few things that I did during those long silently dramatic days:

The captain was a large middle-aged man in a traditional white Sudanese gellabiah and turban. For some hours each day, when the navigation was likely to be difficult, he would sit in a small area on top of the boat giving instructions. He had a little English and was quite kindly so he allowed me to sit next to him a few times, mostly in silence.  That was marvellous: to be on top, to look down at the hippos and crocodiles, to travel over the jungle and watch the monkeys, or to scan from horizon to horizon with no visible sign of the river itself, just sudd vegetation, or huge reeds as far as the eye could see in every direction, and the spectacular skies.  And in the middle of nowhere.

A couple of experiences ‘up top’.  I was up there when the papyrus, or reeds, were as high as the boat, so anyone on the little decks further down would have found them brushing by.  There was no sign of anything else from horizon to horizon, but we stopped. I couldn’t make it out until the captain looked down.  We must have been next to land: the reeds had parted and there was a line of tall, naked blue-black men, Dinka. They had come to trade, seemingly from nowhere.  This was their regular shopping trip.  After a while the papyrus closed, and they disappeared again.  A few hours later we were at Bor, where there were more.   And jungle, and baboons.

The other memory, up there with the captain, was of my one experience of the shisha.  I said that this trip was surreal. It was also very slightly psychedelic.  He would smoke the hubble-bubble as expats called it, as we glided up the Nile through this amazing scenery.  He was clearly often ‘happy’ but he was accustomed to it and in control. One day there was a second shisha and he invited me to try it.  I did.  I’d never smoked, I didn’t have the technique, it wasn’t much of a success, and I didn’t know what had been added to the tobacco, but It was somewhat disorientating and, I remember, rather pleasant.  That position up there could never be repeated; the sights and the slow-moving scenery were mesmerising; I wanted to stay longer.  But it was dinner time. That was it.

I had a radio. For Malcolm and me, in the wilderness hundreds of miles from any form of communication, and mostly with nothing to do for a week and a half, it was a lifeline.  Imagine this in the middle of swampland or jungle: I had forgotten but Malcolm’s diary records that on 14 June England lost 2-3 to Germany in the World Cup Quarter Final; and on the 18th the Conservatives won the election.

It’s tempting to write more and more but I won’t.  It was a unique experience, including the army’s treatment of us in Juba – first alarming and then charming.  Not many have done that trip, and fewer did it after us.  Malcom and I never felt that there was any danger although we knew there was very obvious tight security – at one point we nearly had our cameras confiscated – but when we returned to Khartoum to start our second year almost three months later we learned that the steamer after ours had been sunk by the rebels.