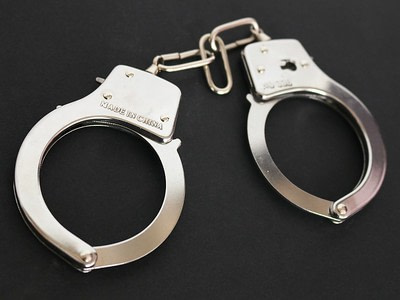 For want of anything better I might as well complete the record of my near-criminality.  Just two more incidents … so far anyway.  There might be more in future – who knows?

Both were in 1985, the first in Saudi Arabia, the second in Berlin.

One late afternoon I was driving to the compound where I lived in the Eastern Province of Saudi Arabia. Only a few hundred yards from the compound I saw, with a sinking heart, a police block:  lights flashing, cars parked at the roadside, people in trouble.  It was impossible to stop and turn round: the police saw me and waived me down.  The heart sank further.  Too late, I realised what it was.  A few days earlier it had been announced that every driver must carry with him his Saudi driving licence, with immediate effect.  The penalty if you were found without it was an automatic three days in prison.

I didn’t have my licence.  I was told to park the car and stand by it, leaving the keys inside.  A line of other drivers were in the same situation.  We looked at each other, unhappy, shrugging our shoulders.  A police car arrived every five minutes or so and it seemed that it was taking a couple of drivers away each time, presumably to prison.  Not at all good.

Well, three days in prison, even in Saudi Arabia, might be considered bearable, and perhaps it was, but the situation for me and my work colleagues was particularly difficult.  We were employed by our main defence contractor British Aerospace (now BAe Systems) to support HMG’s huge military training contract with the Saudi government.  For any of us to be in prison, even for just three days for this rather minor offence, would bring discredit and reputational damage.  It was going to be much worse for me however.  I was in a very unusual and particularly sensitive position.  My reporting line had been moved (the re-arrival in my life of the UK security services – more about that another time).  I’d been officially transferred away from BAe and HMG to report directly to the Saudi Commandant of the training institute, an Air Force general.  My job was to build up maximum trust and goodwill directly with him, day by day, in managing a major project for the future operation of the air force.  For Mr Peace not to arrive at work because he was in prison could be very serious.  Quite possibly the General would smile and accept it, but that couldn’t be guaranteed.  If it went wrong, and particularly if those with other political and commercial interests caused trouble, it could go beyond the Commandant and possibly back to London.  The sun was setting, it was still warm, and Mr Peace was standing at the roadside sweating heavily.

Then the saviour arrived.  The owner of the next car, also waiting to be taken away, was a rather smartly-dressed Pakistani.  I remember he was in suit and tie and had twinkling cufflinks – strange how the memory preserves such things.  He asked to see my wallet.  Puzzled, I showed him.  He asked me to trust him while he took it to a policeman.  Puzzled, very tense, and watching very carefully, I let him do it.  He crossed the road, addressed a policeman in Arabic, showed him our two wallets, and started some sort of dialogue.  There was some nodding and shaking of heads, some shrugs, a bit of gesticulation, and finally the officer gave a nod.  The Pakistani patted him on the arm, walked back to me, gave me the wallet, and said, “Get into the car now and drive away.”   ‘What?!!!”, said I.  “Drive away!”, he said, “Follow me!”.  So I did, half-expecting to be arrested.   We drove round a couple of corners and stopped. He explained.

It was generally thought that the average Saudi policeman was not over-intelligent, and it seemed that this one fitted the description.  My Pakistani friend and saviour had convinced him that Saudi Arabia was the same as every other country in the world: an American Express card was always accepted as the equivalent of a driving licence.  Now how bold was that?!  I wouldn’t have dared!

Later that year I was in Berlin on holiday.  It was the Cold War; Berlin was divided; and I wanted to visit the East of the city.  You could get a permit to look around East Berlin for a few hours, having to return by a particular time in the early evening.  The crossing point each way was Checkpoint Charlie in Friedrichstrasse.  In West Berlin I’d visited a small private museum near the checkpoint.  It was dedicated to the history of the Wall, a moving experience showing the whole story, the awful suffering, and the various escape attempts.  And I’d bought a book telling that story, with many pictures.  It was in my backpack.

As I went through the checkpoint I was checked, naturally enough.  A large female East German (or perhaps Russian?) officer told me to empty the backpack, which I did.  She saw the book and ordered me to give it to her, which I refused.  She ordered again, and I refused again.  Then the easy ultimatum – give her the book or go back. Or get arrested (which of course wouldn’t have happened, but she at least threatened it).  So I gave her the book.  She threw it in a bin.  I continued into the east of the city, spent some hours there, and returned before curfew in the evening.  The next day I went to the museum and bought another copy, which I still have.  So I wasn’t really arrested or detained – it was just a bit tense.

One small anecdote from East Berlin though.  I have a number of disturbing memories of those hours but the most poignant happened as I walked back in the evening along Unter den Linden, then as now a most attractive avenue.  I was one of only a few walking along the street, about to turn into Friedrichstrasse and the Checkpoint.  It was a beautiful evening, quiet and warm, and a few yards behind me were a young man and a young woman, clearly in love, strolling in the same direction.  Behind us in the east the lights were dimming; ahead in the west the lights were ablaze – street lights, bars, shops, clubs – the noise of traffic, music, enjoyment.  It couldn’t have been more symbolic.  I turned into Friedrichstrasse; ahead was Checkpoint Charlie; West Berlin was mine; the evening was going to be so enjoyable.

The couple stopped and watched me.  They couldn’t follow.  We looked at each other.  They smiled, so sadly.  They watched me as I walked through, shaking.  Even now I well up as I remember.

So there’s the Peace Record to date: 1968 Central Prison, Istanbul (innocent though); 1970 carrier of messages to South Sudan revolutionaries; 1970 near-arrest (not really) at bayonet point in Khartoum; 1970 in custody of Sudan army, Juba; 1975 police cell in Tripoli, Libya for apparent drunkenness; 1985 detained for driving offence, Saudi Arabia; 1985 almost detained for attempting to disseminate illegal literature, Berlin.  Plenty of time for more in future.