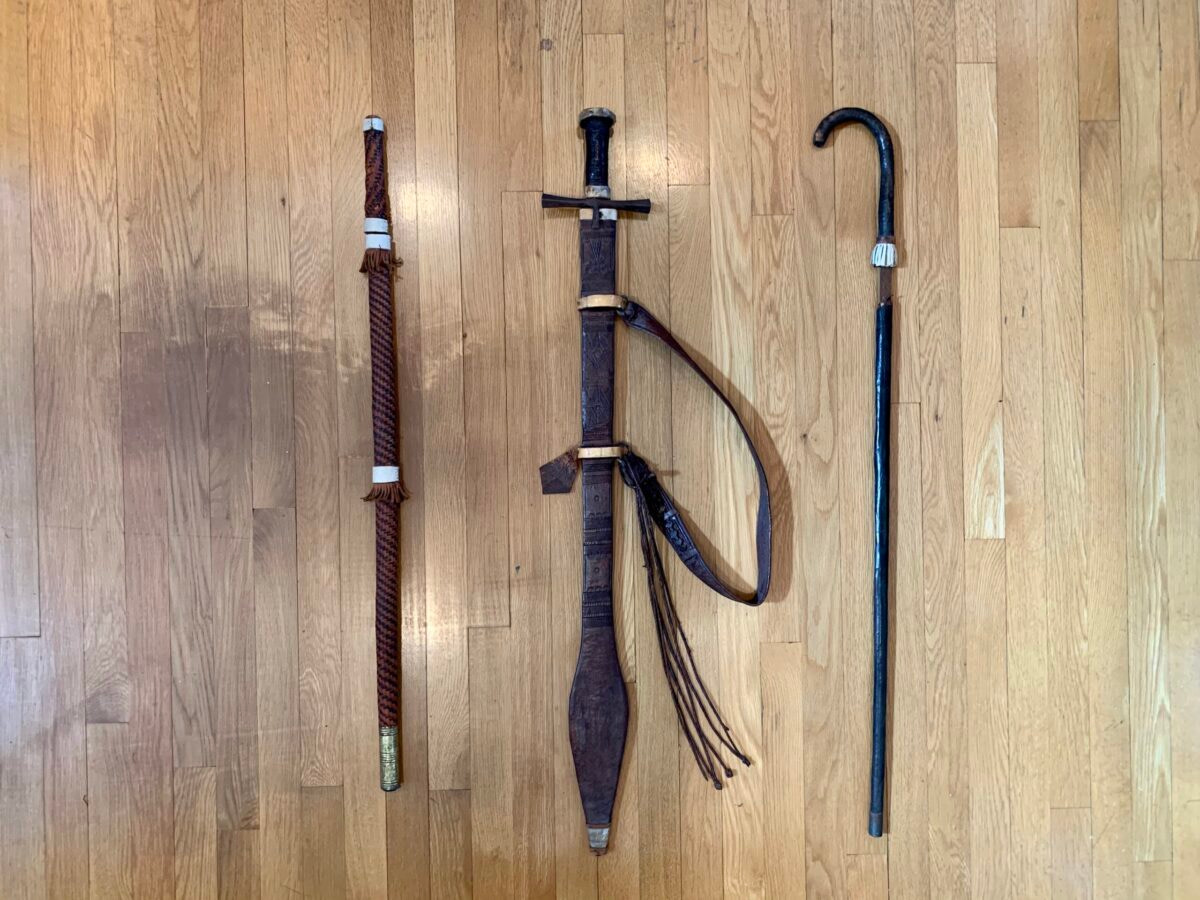 I’m a dangerous man.  Don’t make me angry.   If it looks like I might get violent, get out of my way quickly.  You could be in serious trouble.

It was the taxi driver who first became nervous.  He picked me up from outside the house in Central London for a 20 minute drive to a well-known building.  It was for a party, mainly for media people, more than a hundred of them including some ‘celebs’.  And it was, I’m embarrassed to say, a fancy dress evening.

Rather like night clubs (yesterday’s blog) I’m not very keen on parties, and I certainly don’t like fancy dress.  This would be an unusual event though, something that perhaps I’d regret not attending; so I went.  It was about 25 years ago.

It wasn’t my costume that upset the cabbie.  I was in white arab jellabiya with a white turban – a little unusual but not really alarming.  No, it was probably the full-length sword that bothered him, positioned diagonally across my front, held by the strap over my shoulder.  “Don’t worry”, I said, “I’m harmless. And anyway it’s in its scabbard”.

He wasn’t convinced.  It’s at times like this that one remembers reactions in detail.  I was standing on the pavement; he had his window open; rarely has anyone given me such a searching look, a deep scrutiny, deciding whether to trust me or not.   He decided I was probably a harmless idiot, so off we went.

The party was OK but I was, as always, glad when it was over; and I got a lift back.

That was the last time one of my swords – yes, I have three – were seen in public until this February, when I was escorted through the streets by a policeman.  David in trouble with the law yet again?

Two minutes’ walk from where I live is a short narrow street, a cul de sac.  Cato Street.  200 years ago in February 1820 a group of men plotted to murder the Prime Minister and the whole British Cabinet who, they

believed, would be dining together in a private house in Grosvenor Square.  Someone alerted the police.  They were found in a hayloft in Cato Street above the stables.  A policeman was killed; all were arrested and tried; some were hanged and some were transported to Australia.  The Cato Street Conspiracy had failed.  As far as I’m aware there’s been no subsequent attempt to overthrow the government by violence, unless one considers the Brighton bomb at the Conservative Party conference in 1984 or the IRA’s mortar attack on Downing St in 1991.

We have a first class residents’ association in this area, and some very good organisers.   The 200-year

commemoration included actors in costume – police, soldiers, flower sellers, a horse-drawn omnibus, a town crier – and local people dressed up as best they could.   The media covered it extensively and we even had a few visitors from Australia, descendants of the criminals themselves.  I went there in a long black greatcoat and a wide black hat: I’d decided to be on the side of the conspirators.

It was most enjoyable.  Two very pleasant policemen were also there, keeping an eye on the event and chatting to everyone.  On an impulse I asked one if I could go home and bring my sword, to complete the criminal image.  “Sir’, he said, “The licence for this event will allow you to wear a sword, sheathed, in this street while we police are here; so you can certainly wear it here.  If you carry it between your flat and Cato Street however, you will be arrested.”   Very clear.  Fully understood.  What a pity.   Then he said, “On the other hand, if I come with you to your flat and escort you back to Cato Street, all will be well”.

What a great response!  So that’s what we did, and I spent another hour in the event, the only resident armed with an offensive weapon.   Years ago I’d been Chairman of the residents’ association, so most people knew me; none were alarmed; and although it was tempting to draw the sword out of its sheath, just for a photo, I was aware of the friendly but watchful eyes of the Boys in Blue.

I left without an escort, having shown them that the great coat was long enough to hide the sword.  It was still illegal: I could have been arrested just for being in possession, but it was only two minutes of risk and they trusted me.   Very civilised.

Whence the swords?  The Sudan, 50 years ago.  When I left finally in 1971 I’d brought them back on the plane, in the hold.  All original, not fakes.  One looks like a walking stick – tempting to use it in public!  The biggest one, the one I took to the party and to Cato Street, is rather beautiful, carefully crafted with African markings on both sword and scabbard. and it’s a real warrior’s sword.  I wish I knew the provenance.

Haven’t times changed!  Carrying swords on an aeroplane now?  Motoring across London in a taxi, wearing a sword, now?  Unthinkable.  But wasn’t that policeman obliging.  I was impressed.

Anyway, as I said: Don’t make me angry!  I’m a dangerous man!  Or else the taxi driver was right: I’m a harmless idiot.