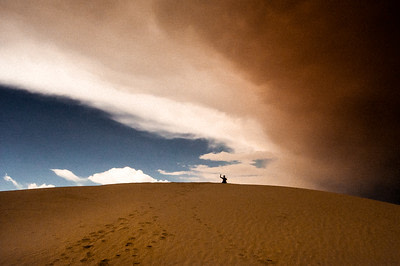 The tiredness is still here but I’m coping, so it’s a return to the blog, and in fact to Libya for some completely random sketches as they rustle around in the memory bank.  It’s bits and pieces, but it makes it easier for me to write.

How to get lost in the desert?  It’s not difficult of course but one sure way was to lose sight of a pipeline.  ‘Follow the lines’ was a rule of thumb. The old hands wouldn’t break that rule but the danger would come when desert storms blew up, sometimes so sudden that visibility could be reduced quickly to zero – yes, zero.  When that happened there were only two real choices: either simply stop, sit in the vehicle and wait till it had cleared – and that could take quite a long time – or keep driving with the confidence that you knew where you were going.  That second option was the risky one but the men did occasionally do that, often finding their way back but occasionally not.  If it went wrong they could either get disorientated and stop in the middle of nowhere or, if they rediscovered a pipeline, they might follow it only to realise it was the wrong one, going in some other direction. When a storm was over, if they hadn’t reached base or had used the walkie-talkie to say they were lost, that’s when the little planes were sent up, each doing grid searches.  Bruno and I went up about six times in my almost three years out there.  In fact all the men were found and all were more or less well.

I had other uses, though: on one occasion another plane found someone who was apparently in a bad condition, and we got a message to say they were bringing him into my little camp.  The male nurse was excited – like me he didn’t have much to do normally and here was a great opportunity for some real work!  He said that almost certainly the man would have respiratory problems through being so long in a sandstorm so he would probably have to perform a tracheotomy, an incision into the windpipe to ease breathing.  And naturally he would need my help.  I have to say that 28-year-old David was not over-enthusiastic about that!

Fortunately it didn’t happen: the man was dehydrated and his skin was in a bad way but he was breathing normally.  Result: one disappointed nurse and one very relieved teacher.

The storms did affect me personally in a way that’s still rather relevant.  I talked about it to the other oilmen in the camp but they didn’t seem to be affected as much.  With strong winds, hair being blown everywhere, sand whistling into eyes, ears, nose, mouth and into trailers no matter how hard we tried to stop it, I would find myself crackling: that is to say the storm created so much static electricity in my body that there would be audible cracks and painful shocks when touching anything metallic such as a trailer door. Wearing good boots with rubber soles didn’t seem to stop it so I got used to releasing the static by touching everything first with my finger nails. It still hurt but it helped.  I still consciously do that sometimes, and in fact a couple of weeks ago it happened without warning: the small patch that I’m wearing behind my ear to dry out the excess saliva (an MND thing) and which is also drying the skin, resulted in a crack and a jolt when I touched a tap.  Lesson learned!

I said today would be  “random images” so now onto leisure time, of which there was a great deal.

Homer!  Vergil!  The first 42-day stint, in late 1973, showed that it was going to be a very quiet life in the camp, with hours of leisure time each day in addition to developing brewing and distillery skills, providing desert rescue and stand-by nursing services, and solo sand-dune sight-seeing!  So rather ridiculously I brought out my Homer and Vergil.  Having graduated in Classics four years earlier this very naive young man thought that he might as well become more familiar with the oeuvres that he should have studied more at college!  It was nonsense of course – I hardly touched them.

Mozart!  One thing that did work though was boxed cassettes of operas.  I knew next to nothing about such works, but having bought a cassette recorder (with radio – essential) I tried it and it worked: complete Mozart operas on tape proved to be hugely rewarding – sounds that were so alien to the desert but so very pleasurable.  The word ‘transported’ springs to mind, and though that might sound exaggerated it’s pretty accurate.  With headphones on, in my trailer or sitting on the steps during the day, I could be transported to Covent Garden, La Scala, the Met, other worlds – very liberating.

And a reputation as a maniac. A few times, in an excess of enthusiasm, I didn’t bother with headphones so the almost silent camp would suddenly resound to The Marriage of Figaro, shocking the few mortals still around.  Clearly I was deranged.  Might have been true!  If anyone is ever thinking of doing a thesis on ‘Life in the Sahara’ just check how many expats spent time with Homer, Vergil and Mozart.  Madness!

And one final random memory:

Flights home.  The airline of choice for the oilmen going back to Britain after 6 weeks in the desert was British Caledonian.  I much enjoyed using other airlines to stop off en route in European cities, but I occasionally used B Cal for direct flights to London.  The company was magnificent.

Do remember this: it was the mid-1970s with its own moralities and ways of doing things (and no media intrusion) – rather different from today.

B Cal knew that the flights from Tripoli to London would be full of oil men, frustrated in so many different ways after their 42 days of non-stop work, and desperately anxious to enjoy themselves the moment the plane took off.  To cater for them the rear two rows of seats were empty (sometimes removed) and were piled with extra boxes of beer, wine, spirits, mixers and so on.  The stewardesses were volunteers – the ‘Tripoli run’ was well known and it needed women who could handle the situation, in whatever way they chose.

The flight took about 4 hours, often riotous hours.  I never saw any serious unpleasantness but there was certainly a lot of fun – that’s the best way to describe it.  And the fun included community singing and whip rounds for the driver [for non-Brits – passing a hat around collecting tips for the pilot].  Quite an experience, and full marks to British Caledonian. How’s that for customer service?

Didn’t think I’d write so much today but these were just bits and pieces as I said, and they rolled off the keyboard without too much effort.  More than enough though!